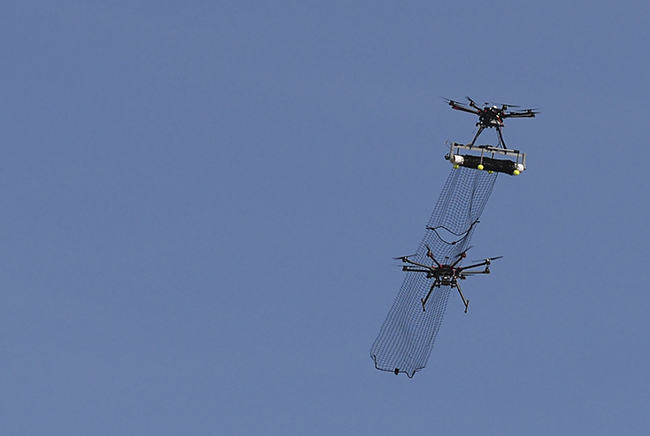 According to the magazine article: “The systems provide “a composite suite of options” to sense and defeat drones attempting to enter restricted airspace around nuclear, space, electronic warfare, long-range strike, and missile defense resources, Air Force spokeswoman Laura McAndrews said. “The concept of ‘tailored and layered defense’ provides the ability to execute kinetic solutions, such as traditional ballistic rounds and capture nets, coupled with other countermeasures that disrupt the operator’s ability to navigate drones in our restricted airspace,” she said.

Air Force News reports that the US Air Force and Army are also collaborating on using 40 mm ammunition with nets that deploy and wrap around the drones to bring them down. “We’ve had some recent success working with the Army on kinetic defeat, successful test round firings,” Wert said. “The idea of a net round is probably a good solution, but that system’s becoming accurate enough where the training rounds are directly hitting UAVs, so very good results there.”

“In May, Pentagon acquisition chief Ellen Lord told reporters Defense Department officials were concerned that military personnel weren’t aware of their options for addressing UAVs and the services weren’t sharing their ideas. Combatant command representatives and acquisition officials meet each month to discuss the right way forward.  That’s generated a list of counter-UAS systems in the DOD with details on their maturity, how many are deployed, and how they are used, Lord said. The Air Force is also working toward laser and microwave weapons for that purpose.”

“Over the past few years, Defense Department officials have pointed to instances of enemy combatants dispatching small drones for strike and intelligence-gathering in the Middle East and of unmanned aerial vehicles lingering near high-end aircraft. US Strategic Command did not answer how many little aircraft have been spotted lately or if the number is growing.”

“So far, they’ve been incidental activities,” STRATCOM boss Gen. John Hyten said at a 2017 Senate Armed Services Committee hearing. “But the fact that they’re occurring, and then if you watch what is happening overseas in the [US Central Command theater] with the use of lethal UAVs and the use of UAVs for surveillance on the part of a terrorist adversary, I’m very concerned that those same kind of UAVs could be employed against our weapon storage facilities, especially on the nuclear weapon storage facilities.”

“Air Combat Command chief Gen. Mike Holmes in 2017 also noted two incidents that interfered with operations on the same day and required reports to Air Force leadership. Conventional military assets need similar policies and protections as STRATCOM has put in place over the past few years, allowing workers to track and engage drones when needed, he argued. “At one base, the gate guard watched one fly over the top of the gate shack, tracked it while it flew over the flight line for a little while, and then flew back out and left,” Holmes said. “The other incident was an F-22 . . . had a near collision with a small UAS, and I don’t have anything that I can do about it.”