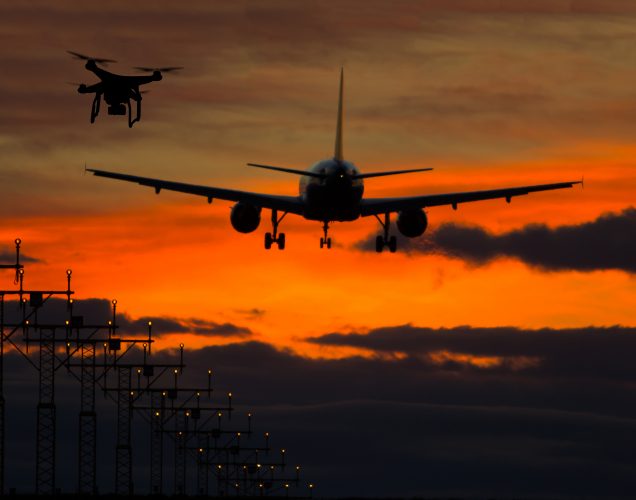 Airports need effective counter measures to safeguard their operations from rogue drone incursions. What can manufacturers offer, specifically, to the airport market? Suppliers attending British-Irish Expo in London in June 2019 showed what new technologies were being developed to focus on airport operations.

Norwegian airport operator Avinor recently selected the ctrl+sky multi-sensor counter drone system to protect airports within its network, under a frame agreement recently signed with local partner Anker Sikkerhet. The first installation went live at Stavanger Airport in February 2019, with other airports due to follow. Anker CEO Ole Johnny Mikalsen told Unmanned Airspace the solution includes “a military-grade radar at a civilian price” and is currently operating in test mode to track both drone and avian targets.

Ctrl+sky is supplied by Advanced Protection System (APS) of Poland and provides detection, tracking, identification, and mitigation capability. The company’s X-band 3D radar provides 360deg coverage over 3km range, integrated with PTZ camera, RF sensor, and acoustic sensor. The CyView software platform relays data to a single display which can be viewed on multiple devices. An RF jammer which operates on selected frequencies outside those used on the airport completes the system. APS CEO Maciej Klemm added: “The different sensors complement each other and deliver a common picture. The airport operator can pinpoint where there is a device and liaise with the police.”

Installing detection and monitoring equipment allows an airport operator to make an informed decision without closing a facility for long periods of time. French systems integrator CS connects sensors and effectors within its Boreades platform which is designed to provide command and control for a UAV detection and resolution system. Already used by French police and military forces, the Boreades architecture is now available for airport applications.

Steelrock Technologies meanwhile has launched two products which provide detect, track, and jamming capabilities. The company’s portable equipment is already in service with the military, and at airports in the UK and overseas. Chief Technical Officer Chris Hamer says its handheld jammer uses algorithms to generate waveforms so these can be selected according to the application. In a more recent development known as ODIN, currently undergoing tests with UK air navigation service provider NATS, Steelrock combines detect, identify, track and defeat solutions. ODIN combines Hensoldt’s SharpEye surveillance radar, thermal and daylight camera, and Steelrock’s effector in an integrated system designed to operate safely at airports. The company is investigating whether “the kit be operated while aircraft are coming into land,” says Hamer, to provide a tailored airport solution.

Another company specialising in handheld effectors is Openworks, whose portable Skywall 100 net-catcher system is deployed at London Gatwick and Heathrow airports alongside the AUDS solution provided by Blighter Surveillance Systems, Chess Dynamics, and Enterprise Control Systems. Director James Cross said as drones become more autonomous a layered defence is needed with multiple solutions. “The key is how they work together and make use of smart integration.” The company recently launched Skywall 300, a remotely operated net-capture system currently under test in the US.

Meanwhile, DeTect supplies its solid-state S-band MERLIN bird radar to airports throughout North America, Europe, Asia and Africa. The company’s DroneWatcher detection and defence system consists of three technologies that can operate independently or together to provide multi-layer security. In addition to its HARRIER radar designed to track small cooperative and non-cooperative targets over 2 miles range, it includes an APP which tracks and records consumer drones, and RF tracking device which can be installed around an airport. DeTect supplied a dual-function DroneWatcher and MERLIN bird radar at Panama City Florida Airport in 2017, and is working with San Diego International Airport on drone protection solutions based on DroneWatcher.

Monitoring drone activity is a prerequisite to managing drone incursions at an airport according to Qolcom, a network integrator working with DeDrone to provide drone detection and tracking services. The partners installed drone detection technology at more than four regional UK airports during 2018 to identify and analyse drone activity. According to the White Paper https://www.qolcom.co.uk/wp-content/uploads/2019/01/Dedrone_Airport_Airspace_Activity_Study_2018.pdf  published by the partners, 285 drones were detected over 148 days, most often at weekends. The data identified the make of drone, flight frequency and time of day. As a result, the airports have a baseline of data to work with their leadership and community liaisons to build awareness campaigns and target resources. Both London-City and Edinburgh airports selected Qolcom and Dedrone to provide drone monitoring services in the second half of 2018. The advantage of identifying and managing unintended drone incursions is the first step towards managing very exceptional planned incursions.