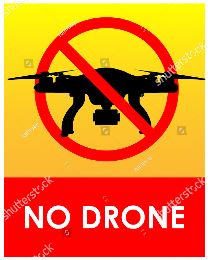 The Washington Post reports that the Trump administration is asking Congress to give the Departments of Homeland Security and Justice the power to track, reroute or destroy the devices.

According to a copy of the legislative proposal obtained by The Washington Post –“The legislation would free safety and security officials from those agencies, and their contractors, from laws against intercepting electronic communications that officials say have hamstrung their ability to protect sensitive facilities from increasingly cheap and powerful unmanned aircraft, which already number in the millions…..It would also give wide discretion to those working for the government, outside observers said. The full picture of which facilities would fall under the new authorities remains unclear. Those facilities would be subject to what the proposed legislation calls a “risk-based assessment” as well as regulations and guidance that would be shielded from disclosure under the Freedom of Information Act.”

“Overseas, ISIS, other terrorist groups, and criminal organizations use commercially available [unmanned aircraft systems] to drop explosive payloads, deliver harmful substances, and conduct reconnaissance,” says a document accompanying the legislative text, according to the newspaper.  “Law enforcement and homeland security professionals are gravely concerned that terrorists and criminals will use the nefarious tactics engineered overseas in the homeland.”

At the end of March Congresswoman Vicky Hartzler (MO-04) introduced H.R. 5366, the Safeguarding America’s Skies Act, (http://www.unmannedairspace.info/counter-uas-systems-and-policies/new-congress-act-aims-allow-us-federal-agencies-shoot-drones/) which would allow the Department of Justice and the Department of Homeland Security to detect, track, and engage with drones that pose a security risk to agency facilities and assets.