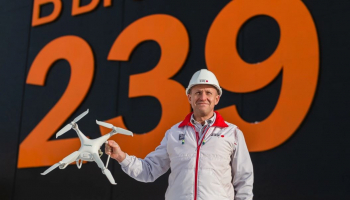 The Chelyabinsk Pipe Rolling Plant, part of the Chelyabinsk Pipe Plant, has carried out pilot tests using a counter drone system supplied by Kapersky and Rohde & Schwarz. Hardware and software was tested over critical infrastructure to develop possible scenarios for protection against drone attacks, according to the Russian industry publication Steelland.

Kapersky’s counter drone solution is designed to detect Unmanned Aerial Vehicles (UAVs) as a distance of 4,000m, determine its model, localise the pilot’s location and transmit data to the interface. The newest version features an integrated RFID module from Rohde & Schwarz. During the tests, the solution detected drones crossing the plant’s protected perimeter and re-routed them back to their take-off point. The system works autonomously and starts detecting from the moment the drone is turned on. When a drone tries to cross the protective perimeter, no harm is done to the device: the radio signal neutralization module blocks the drone’s communication with the control panel and forces it to return to the starting point or make a soft landing at the point where communication with the operator is lost.

According to the newspaper report, Vladimir Turov, Kaspersky project manager said: “I believe that the system successfully completed its tasks within the framework of a pilot project at the Chelyabinsk Pipe Rolling Plant. We demonstrated the capabilities of the hardware and the flexibility of our software. The process of detecting objects in the air, their classification and neutralization of drones were at a high level, despite the low temperature and snow. The solution has once again proved its effectiveness at facilities of any scale and in any weather conditions.”