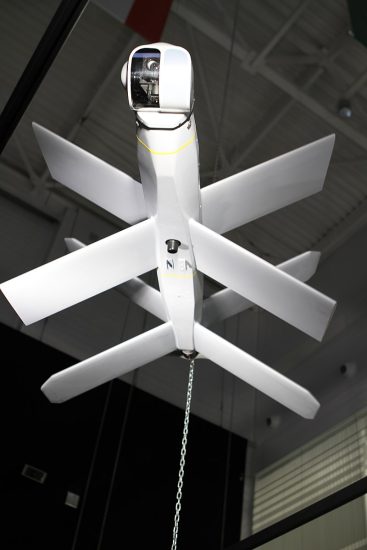 Advanced counter drone systems like the German IRIS-T, Soviet-origin S-300, Buk, and Osa are inadequate in dealing with Russian loitering munitions and Iranian Shahed-136 suicide drones, according to reports in the EurAsian Times and UAS Vision.

“Manufactured by Zala and Kalashnikov, the Russian Lancet-3 is a lightweight loitering munition with a three-kilogram warhead and a 40-minute endurance. It is a further development of the KYB Kub (Cube) loitering munition, a flying-wing design that was combat tested in Syria in 2019. The Lancet-3 has a take-off weight of 12 kilograms and is launched via a rail-mounted catapult system, capable of hitting targets up to a distance of 40 kilometers. It has two sets of X-shaped wings that can be folded and packed into a carrier trunk.

“The Lancets are now reported to be present with nearly all Russian units in south and eastern Ukraine, defending against Ukrainian counterattacks and consolidating their hold in the pro-Russian regions that recently voted in a referendum to remain with Moscow. Ukraine claimed on October 12 that it had shot down two Zala Lancet drones, besides many Iranian-origin Shahed-136 kamikaze drones.

EurAsian Times quotes ROSTEC: “The Russian Lancet kamikaze drone cannot be harmed by the latest laser weapons due to the built-in anti-laser protection. It is almost impossible to intercept and destroy. Thanks to the built-in anti-laser protection, even the latest laser weapons against drones are not afraid of this drone [sic],”

“While there have not been any reports of laser-based C-UAS systems with Ukraine, Russia’s laser-resistant technology on the Lancet still makes it ‘future-proof.’ Such weapons are likely to become commonplace, considering the scale of military aid pouring into Ukraine,” says EurAsian Times.