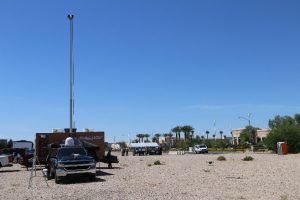 A drone detection demonstration carried out at Nevada UAS Test Site brought together US and international technology companies to evaluate drone detection technology under the Federal Aviation Administration (FAA) Pathfinder Program. The Nevada Institute for Autonomous Systems (NIAS) and the State of Nevada conducted its first international Desert Drone Detection (ID3) demonstration to advance airspace safety and surveillance and detection technology in early August. Participants hope to advance legislation that would make it easier to fully test the potential of drone detection, surveillance, and airspace protective technologies and protect the National Airspace System from rogue drone operators with unintentional or malicious intent to violate FAA regulations.

In 2016, the FAA expanded its Pathfinder Program that focused on detecting and identifying unmanned aircraft systems (UAS) flying too close to airports. In November 2016, the FAA and the Department of Homeland Security (DHS) conducted drone-detection research at the Denver International Airport for the FAA’s Pathfinder Program on UAS Detection at Airports and Critical Infrastructure. The Nevada Institute for Autonomous Systems (NIAS) and the State of Nevada acted as the air boss for flight operations for the Denver evaluations.  Industry partners involved in the Denver flights included CACI International, Liteye Systems and Sensofusion – all of which are Nevada Teammates. The ID3 continues the evolution of drone-detection research that started with the FAA in 2016.

The ID3 culminated in an industry panel discussion to build the first ID3 Task Force to accelerate FAA policy and procedure that can increase drone detection education, technology testing and development, and safe use of this technology for towered airports and critical infrastructure across Nevada and the U.S. NIAS and ID3 will work collaboratively with Nevada legislators in Nevada and in Washington D.C. to identify and advocate for the legislative and regulatory changes required to advance the autonomous systems industry.