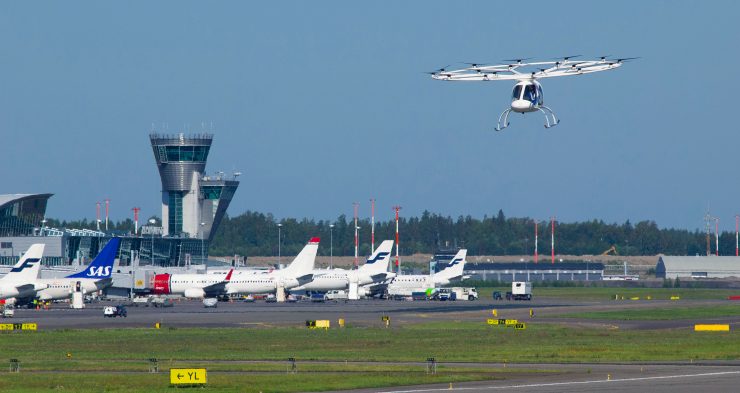 The world’s first electric air taxi flight managed by a UTM system integrated with the country’s air traffic management (ATM) system, with multiple UTM service providers sharing flight tracking and communications data through a single flight information management system (FIMS) took place on August 29, 2019 at Helsinki Airport in Finland. The demonstration was the first evidence to show it will be possible to develop a UTM system to support autonomous air taxi and drone operations in congested lower airspace, which will be vital to ensure the business plans of urban air mobility (UAM) operators can be realised.

“UTM will enable vehicle autonomy at scale,” said Pamir Sevincel of AirMap, one of the UTM service suppliers taking part in the demonstration. “You can a few autonomous aircraft flying around each other with their own see-and-avoid systems but if want to have thousands of flights over a city with hundreds of aircraft you need to ensure UTM is there.”

But developing such a UTM system is a highly complex technical challenge. At the heart of the challenge is the FIMS.

“UTM service providers discuss and share information through the FIMS, using existing components but combining them, not just traditional UTM services but also services such as precision weather, supported by the Finnish Meteorological Institute, with mobile coverage supported by Telia and Elisa,” said Jonas Stjernberg of Robots Expert, one of the coordinators of the project. “So we get the real-time situational awareness to all airspace users, manned and unmanned. We can connect FIMS from two different countries enabling international operations, such as logistical operations between Finland and Estonia which could be served by drones.”

“The UTM system will also need to assess all the data to be able to reject some drones from flying into certain areas where there is a requirement for the drone to carry the kind of technologies they will need to fly in an urban environment,” said Ronni Winkler Østergaard of Unifly.

The operation was the final leg of the Gulf of Finland (GOF) U-space project, part of the Single European Sky ATM Research (SE SAR) Programme to demonstrate how ATM and UTM systems enable UAM. The GOF U-space flight trial demonstrated how ATM and UTM can act in combination to enable safe and efficient air taxi operation in urban environments, including airports. The Volocopter electric air taxi performed a flight managed by three UTM service providers, AirMap, Altitude Angel and Unifly. The FIMS developed for the Helsinki demonstration was a distributed system giving identical core operational data in AirMap, Unifly and Altitude Angel UTM systems. The flight plan was sent to ANS Finland for approval via the FIMS and the flight was tracked via the Unifly flight tracking system. As part of the demonstration a drone was flown in the vicinity of the Volocopter flight, to test whether all drones could be tracked in the area of operations.

Flight planning in a UAM context in these regions has to be performed a few seconds before the flight, ensuring the door-to-door routeing is accessible. It involves dynamic flight planning, adapting the flight to changing environmental and traffic conditions which have to be monitored alongside the procedural interface with ATC, interacting with existing controlled airspace. The demonstration used Frequentis integrated flight plans for the Volocopter flight, the same system used by many air navigation service providers for managing ATM services. The demonstration looked at strategic flight plan de-confliction – at the flight plan stage – and tactical de-confliction – once the drone or air taxi is in flight.

“As we move forward we need to look at tactical flight plan de-confliction – how does that flight plan change during the operation itself?” said Christopher Forster of Altitude Angel. “This means looking at whether there is temporary flight restriction around some airspace, where the police need to close the airspace, for example.  Maybe the weather conditions have changed, where the wind speed is beyond the performance characteristics of the drone. Ensuring we have the right inputs to that environment will ensure we have the right changes to that flight-plan.”

“We are happy to say that all providers we tested were compatible with the Volocopter systems,” said Jan-Hendrik Boelens, CTO of Volocopter: “As a member of the SESAR consortium, we have the rare opportunity to work at the forefront of integrating ATM/UTM with all relevant stakeholders at the table: regulators, airports, air navigation service providers and UTM providers. This pan-European ATM initiative puts another indispensable part of Urban Air Mobility ecosystem into place. We know that air taxi technology is viable: certification has been defined by the EASA, we will build our first VoloPort infrastructure before the year is out and with the GOF U-Space demonstration we have now shown that the existing UTM technologies are viable for UAM. The indispensable aspects of the ecosystem exist, now it’s time to bring Urban Air Mobility to life.”