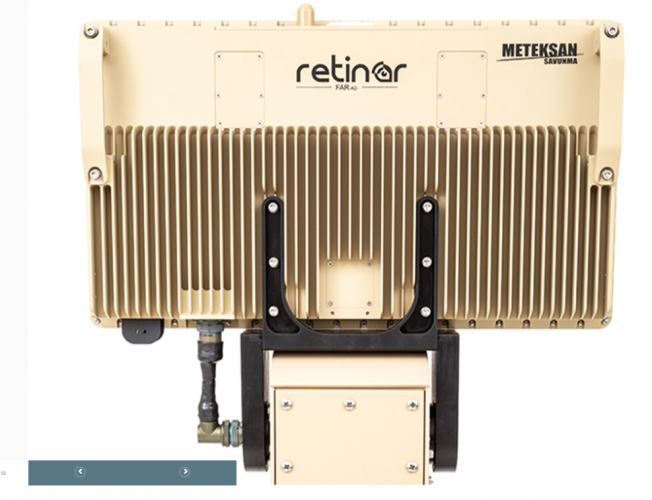 “The delivery of the Retinar FAR-AD Systems, which successfully completed many different tests such as distinguishing drones from birds, identifying and tracking different drones such as DJI Phantom, TALON, has been realized.  The Retinar FAR-AD Drone Detection Radar, developed by Meteksan Defense, is a radar system against mini/micro unmanned aerial vehicles and threats from land. The Retinar FAR-AD will automatically scan large areas and serve as the primary sensor of the security forces against drones.

“The system, powered by low RF output power in the Ku frequency band, has high-tech solid-state radio frequency design and digital-based radar architecture. Using a customized pulse-compression pulse doppler waveform, the system offers efficient modes of use that can be selected with different wave shapes and different angular rotational speeds by the help of digital radar architecture. The Retinar FAR-AD is not affected by the instant maneuvers of threats thanks to its high rotation speed of 30 rpm and monitors threats successfully.

“The Retinar FAR-AD can detect and track threats with its 40° elevation angle up to 7 km for land targets and mini/micro UAV’s up to 3 km. The Radar gives information on direction, speed, distance (up to 9 km) and orientation of targets through “User Interface Software” to its operator. The system, which can automatically classify the tracking information in tracking mode while scanning, increases classification performance with detailed algorithms in the Target Analysis Mode (Spectrogram Analysis) to resolve resulting uncertainties and improve classification reliability.