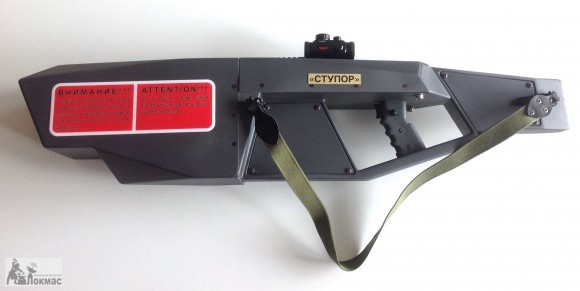 The Russian Army is reported to be trialling the latest version of Russia’s Lokmas Stupor anti drone gun (source http://antikopter.ru/perenosnoy-kompleks-elektromagnitnogo-i-optiko-elektronnogo-podavleniya-bespilotnykh-letatelnykh-apparatov-grazhdanskogo-naznacheniya-pkp-bpla).

According to the company: “The suppression complex is applied up to the maximum range of the drone’s visibility by the operator (500 m). The principle of the electromagnetic and optical-electronic suppression complex is based on interrupting the operation of the control channels, data transmission and navigation. In addition, the complex is equipped with a laser emitter of visible range, which allows to partially or completely disorganize the process of video filming, which is conducted from the drone.”

“On the basis of the Center for Unmanned Aircraft of the Ministry of Defense of the Russian Federation, comparative tests of promising means of suppressing UAVs have been carried out. Our company has presented two samples of portable complexes of suppression of “drones”. According to the test results, the commission noted the effective application of the product “STUPOR” at ranges from 0 to 650 meters and unstable suppression at distances from 650 to 850 meters. It is worth noting that the visibility of the suppressed sample of foreign production was no more than 400 meters (guidance was made on landmarks).”