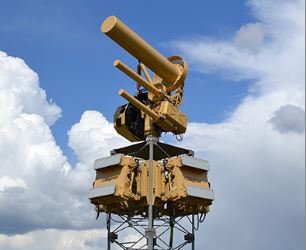 Press reports say Liteye Systems (http://liteye.com/) has received a USD18 million follow on contract for the delivery of numerous containerized anti-unmanned aircraft systems, or C-AUDS for short, from the US Air Force. These systems will all deliver in the next 120 days. This is the fifth contract for C-UAS systems and services Liteye has received since the fall of 2016 says the company.

The US version of the AUDS system first deployed with the US Army in late 2016 and Liteye is developing more advanced capabilities that can be layered into their solutions. These advancements will be needed to combat the growing threat today, and for years to come, from the fast growing unmanned or robotic systems market.

“The unmanned systems industry is innovating at an incredible rate.” said Kenneth Geyer, CEO of Liteye, “Unfortunately with all the great benefits that provides it also spawns the rogue operator who uses that tech in a malicious way. At Liteye our goal is to stay ahead of that threat.”

Liteye’s partner companies of Pratt & Miller, Numerica, and Chess Dynamics form the core team that is producing the new C-AUDS variant in Centennial. This containerized system features an operator suite, hardened for use in any climate, that can easily be moved between locations. The platforms innovative design allows for the ability to “Bolt on” new technologies in the future as threats evolve in the field.

Liteye is now deploying and supporting their AUDS, M-AUDS, M-AUDS-KE, and C-AUDS variants of their CUAS system. All four have the capabilities to detect, track, identify, and defeat enemy UAS with layers of different technologies coming together to create a solid line of defence.

In a related news item, Northrop Grumman Armament Systems Division (NG-ASD) has told Jane’s that it has integrated the 30 mm Bushmaster M230LF automatic cannon with Liteye’s electronic C-UAS system – developed in partnership with Chess Dynamics and Pratt & Miller – onto a Stryker infantry fighting vehicle to demonstrate how electronic and kinetic attack approaches would work together to neutralise small UAS threats as well as provide increased firepower capability to protect the vehicle and crew from ground threats.