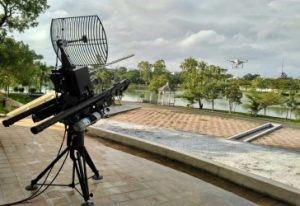 IMI Systems of Israel has announced its Red Sky 2 Drone Defender System was chosen to protect thousands of participants in the royal funeral ceremony of the former King of Thailand Bhumibol Adulyadej (Rama IX), who passed away last year.

According to the company: “IMI Systems was one of the few companies, if not the only one, to enter the Thai Holy of Holies in a historical mission of national significance of protecting the various funeral events and ensuring a clean aerial security zone free from threats until the departure of the last guest of the five days’ ceremony, which was attended by senior members of the Thai royal family, quarter million Thais and representatives from 42 different countries around the world.

“The Red Sky 2 Drone Defender System was purchased by the Thai Air Force a week before the funeral during the preparations for the ceremony. The system was operated throughout the various events by a Thai Air Force personnel and provided comprehensive protection against drones’ infiltration to the various funeral ceremonies held in the Bangkok’s Royal historical district as well as to the Thailand’s International Airport Don Muang, the airport arrivals and departures zone, the airport terminal and the VVIP area that hosted representatives from 42 delegations.

“Upon acquiring the system, a dedicated Thai Air Force technicians team was trained by IMI System’s team of experts in operating the system….During the funeral ceremonies, two alerts were received regarding attempts to activate drones. Both attempts were immediately neutralized by Red Sky 2 using an automatic blocking means that prevented the two threat scenarios from continuing their mission which was enabled by the system’s programming to zero false alarms.”