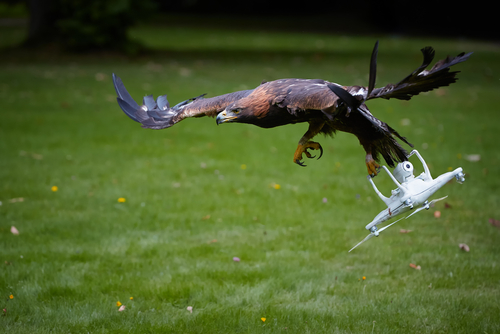 The Swissinfo.ch news service (https://www.swissinfo.ch/eng/no-guarantees_anti-drone-eagles-being-trained-to-serve-on-geneva-police-force/43927044) reports that two young eagles are in training with a Geneva police falconer to learn how to intercept undesirable Unmanned Aerial Vehicles (UAVs).

“The Geneva police confirmed information published in the Le Matin Dimanche paper on Sunday but warned that there were no guarantees this approach would work. The two eagles should be operational this year, said Silvain Guillaume-Gentil, spokesperson for the Geneva police. He added that the eagle is a wild animal, the training is long and tedious, and results are not predictable.  A few months ago, the Geneva police acquired two eagle eggs which hatched successfully. The idea of integrating eagles into the Geneva police force to intercept drones was mooted last spring.  Similar projects have been launched elsewhere but are still untested in real-world situations. The French army is training Golden Eagles for this purpose but the Dutch police recently abandoned their anti-drone eagle programme after the birds of prey repeatedly disobeyed orders.”

According to the news service the use of UAVs was recently recommended by the ad hoc working group set up within the Conference of Cantonal Police Commandersexternal link (CCPCS). In the future, drones could potentially be used “just as well as vehicles or helicopters,” said a spokesperson to the SonntagsZeitung paper. Ten police forces are already using drones to monitor accidents or search for missing persons in Switzerland. Other cantons are evaluating the possibility of acquiring such equipment in the near future, said the report