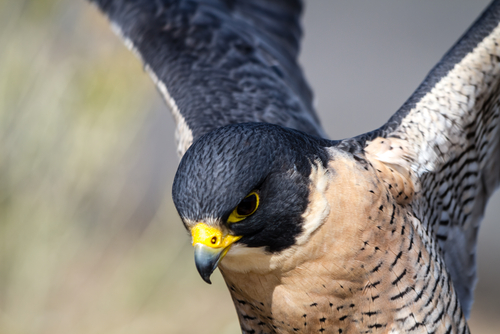 Researchers at Oxford University have discovered that peregrine falcons steer their attacks using the same control strategies as guided missiles. The findings, which overturn previous assumptions that peregrines’ aerial hunting follows simple geometric rules, could be applied to the design of small, visually guided drones that can take down other ‘rogue’ drones in settings such as airports or prisons.

The research, initially funded by the US Air Force Research Laboratory and published open access in the journal PNAS, may also give scientists greater insight into the pursuit behaviours of other predatory species – in the air, in water, or on the ground. Principal investigator Professor Graham Taylor, of the Oxford Flight Group in Oxford University’s Department of Zoology, said: ‘Falcons are classic aerial predators, synonymous with agility and speed. Our GPS tracks and on-board videos show how peregrine falcons intercept moving targets that don’t want to be caught. Remarkably, it turns out that they do this in a similar way to most guided missiles. Our next step is to apply this research to designing a new kind of visually guided drone, able to remove rogue drones safely from the vicinity of airports, prisons and other no-fly zones.’

The Oxford researchers used miniature GPS receivers to track peregrines attacking dummy targets thrown by a falconer or towed by a drone and were able to apply a mathematical simulation to these movements describing the dynamics of the guidance system used in intercepting the dummy prey.

The researchers collected on-board video giving a falcon’s-eye view of the attacks and used this to back up their conclusions. They found that the terminal attack trajectories of peregrines follow the same law – known as proportional navigation (PN) – used by visually guided missiles, but with a tuning appropriate to their lower flight speed. This method does not require any information on a target’s speed or distance, instead relying simply on information about the rotation of the attacker’s line of sight to the target.

The researchers conclude that PN guidance optimised for low flight speeds could find use in small, visually guided drones designed to remove other drones from protected airspace. Recent publicity has revealed the growing problem of drones flying drugs and mobile phones into prisons, and of drones being flown in the vicinity of airports.

Co-author Dr Caroline Brighton, from Oxford’s Department of Zoology, said: ‘We spent four field seasons flying falcons in the Welsh hills, working with an experienced falconer and a qualified drone pilot. It was very exciting to study these sleek, formidable aerial predators, and to watch them as they chased down our manoeuvring lure towed behind a small remote-controlled airplane – then, through our computer modelling, to reveal the secret of their attack strategy.’