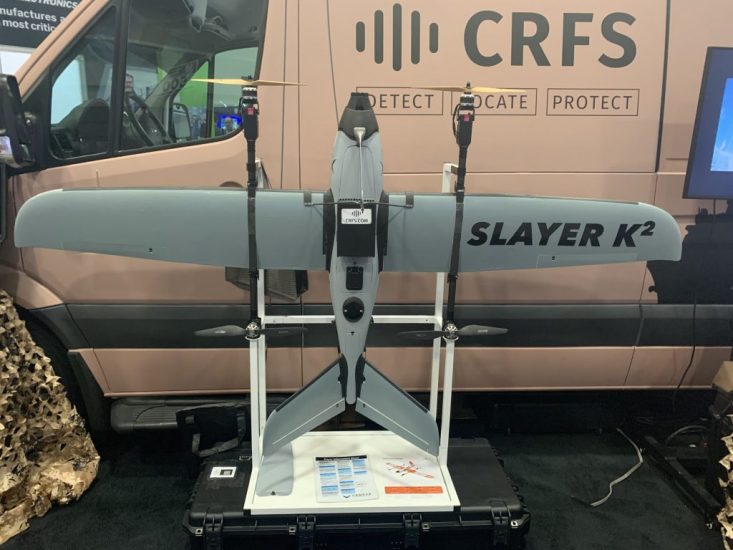 Censys Technologies debuted its Slayer Kinetic Killer Counter-Unmanned Aerial Systems (C-UAS) at the 59th Annual Association of Old Crows International Symposium and Convention. According to a company news release, Slayer K2 is a C-UAS development based on Censys Technologies’ existing Sentaero BVLOS. The company’s civilian UAS becomes a loitering C-UAS drone, with the system intercepting threats by crashing into them.

Censys Technologies aims to use Sentaero BLVLOS’ State-of-the-Art Detect-and-Avoid System, which allows the drone to automatically avoid other aircraft, to detect and track UAS threats.

Once detected and tracked, Slayer K2 will intercept by physically ramming the threat. Modifications to the Sentaero BVLOS for this mission include reinforcements to the airframe and a mounted blade. If the threat was intercepted and there were remaining Slayer K2s, the drones could be recovered for future use.

Censys claims its Slayer K2 plays a role in a layered C-UAS network as the system could deal with UAS threats that other C-UAS defenses would struggle with.

According to Censys Technologies Vice President of Quality and Safety Duke Samouce: “Counter UAS has to be a layered defense because you’ve have other capabilities here that might shoot nets, quadcopters might fly up and hit it, behind me they have an RF (radio frequency)  transmitter that knocks them out. If the threat has RF for guidance. If the threat UAS is just using GPS for guidance RF jamming is not going to stop them. Unless you actually hit it, it’s not going to stop that drone. If it’s going to a grid point with 20 pounds of explosive on it, it’s going to get there. But a kinetic killer can take it out.”

When asked which categories of UAS Slayer K2 could take on, Duke stated that the system could deal with UAS threats up to Group 3.

However, the speed of Slayer K2 at this iteration is not enough to catch up to drones like the Shahed. With Group 3 UAS threats going up to twice the speed of Slayer K2, Duke acknowledged that speed will be an issue. Censys Technologies is also working on a faster drone that will “bridge this (speed) performance gap.”

When asked about how lessons from Ukraine are influencing Slayer K2’s design, Duke highlighted the challenges of a GPS-denied environment and the use of the UAS for Intelligence, Surveillance, and Reconnaissance in addition to its C-UAS mission.

This was Slayer K2’s first appearance, with the drone on display being the first prototype and, subsequently, the system is still in the early stages of development. Information provided by Censys Technologies indicates that the drone’s mission planner and ability to operate in GPS-denied environments require further research and development. Duke also noted that Slayer K2 will remove components from the Sentaero BVLOS, as for C-UAS the drone will not need as many components compared to the civilian design.

“We’ve got a lot of interest. We’re gonna be going to a demonstration soon. This is the first time it’s ever been brought out. So we’ll build another one. Because the one-time use will have different aspects about it. It won’t have as many electronics and it may not even be painted.”