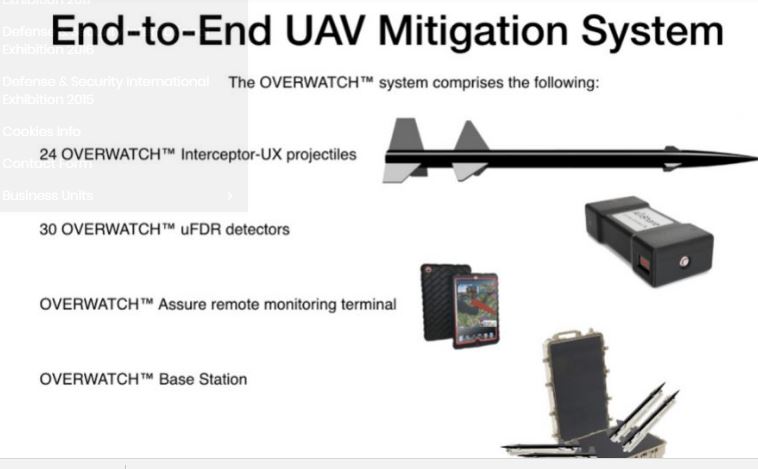 “The Interceptor-UX is based on five patent-pending technologies which enable detection, tracking, and kinetic mitigation of small UAVs using a high-persistence countermeasure cloud. The proprietary countermeasure cloud improves the ability to defeat incoming small UAV threats under all conditions by disabling their propulsion system. AirShare provides an end-to-end system to safely and effectively stop small drones from encroaching on protected airspace and personnel,” according to material published by Armyrecognition.com. “The OVERWATCH™ Interceptor-UX includes four main components, the Interceptor-UX missile that create the countermeasure cloud, uFDR detectors used to detect the UAV threats, the remote monitoring terminal which is used to identify the drone threat and the base station used to launch the missile.”

“The OVERWATCH™ system is safe to operate in urban environments, enables greater range, has no collateral damage, is effective against evasive maneuvers and swarms, provides simplified logistics, and is lower cost than conventional kinetic or electronic warfare approaches….system detects, tracks and mitigates an incoming threat within seconds using a rapid kinetic response. The world’s lightest guided missile, weighing ~700 grams and constructed from lightweight materials, does not cause collateral damage even if misused. The system stops wayward or malicious drones up to 2 kilometers away and brings them decisively to the ground by deploying a cloud of environmentally friendly elastic countermeasures which become ensnared in the drone’s propellers. For urban and airport applications, a custom parachute ensures the captured drone descends safely.”

“The OVERWATCH™ Interceptor-UX missile can be mounted on vehicle or vessel but it can be also used by individual soldier. It can offer a protection sphere from 1,000 to 4,000 m. The system can be integrated into existing Battlefield Management Systems or used in standalone. The technology has been selected by the Government of Canada and is now being offered to select military, law enforcement, and public safety clients. The company leverages domain expertise in detection, tracking and mitigation to provide a lightweight, autonomous system which requires little to no operator intervention.”