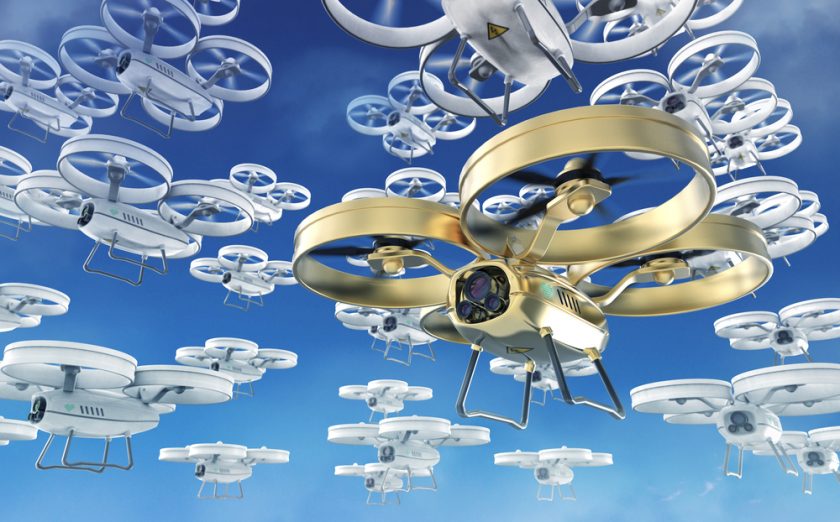 Five speakers agreed on the need for a layered safety case approach to low altitude drone separation at the ICAO Drone Enable 2022 Webinar on 7 April. The role of vehicle to vehicle (V2V) drone separation in the evolving Uncrewed Traffic Management (UTM) ecosystem is a key issue and it remains far from clear how far away a drone has to be to ‘remain well clear’ in the certification process.

“The vehicle itself will play a role in the future as an extension to the ground surveillance system, but we haven’t got a fixed solution,” said Robin Garrity, SESAR Joint Undertaking (SJU) Senior External Affairs Officer, and webinar moderator.

“Boeing champions an approach that looks at strategic conflict management through to separation provision, and finally collision avoidance,” said Brendan Williams, Airspace Integration Technical Lead at Boeing Australia. “This makes maximum use of the infrastructure and services available today; taking account of airspace design as well as airspace structure.” 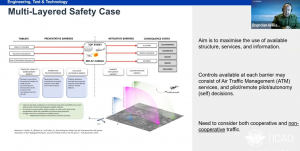 Boeing Australia successful tested its Detect And Avoid (DAA) capability in partnership with Insitu Pacific in 1Q21. The tests demonstrated BVLOS operations above 400ft in non-segregated complex Class G airspace (uncontrolled) using an Insitu-built ScanEagle equipped with a vision-based DAA solution. Detection of another aircraft was relayed immediately to the Unmanned Aircraft System (UAS) pilot to support decision-making. “Boeing is trying to understand proximity to inform DAA tools such as Apollonius. We have a Mode S transponder, ADS-B IN and OUT, prototype EO detection system and INEXA airspace management display.” Identifying the cross-over point between self-separation and UTM is the challenge, he said.

The Australian Aviation Safety Authority (CASA) released a draft regulatory roadmap for Remotely Piloted Aerial system (RPAS) and Advanced Aerial Mobility (AAM) in March 2021 for public consultation that identifies the need for further analysis to identify the cross-over point from self-separation to some form of managed environment.

Meanwhile Joint research by the Federal Aviation Administration (FAA) and NASA is looking to define a concept management model said Dr Marcus Johnson, co-lead for NASA’s UTM Research Transition Team. “Currently small UAS (sUAS) are limited in terms of size, weight and power, so you cannot put a lot on them.” There is also a cost factor to consider. NASA identifies the following challenges in terms of detect and avoid:

NASA’s objective is “to treat conflict management mitigation as a continuum of independent and interoperable capabilities and services rather than disjointed sensors, algorithms & functions”. From a strategic point of view, this starts with pre-tactical conflict management before onboard technologies take over and involves U-space service providers and drone operators in a holistic system where some functions are shared, some are coordinated, and some are onboard the drone. 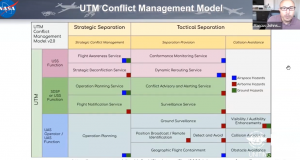 Among lessons learned, NASA found many systems and sensors were not compatible or interoperable with each other and hard to put into a single display. “There is not a ‘drop in’ solution to solve all the problems and risks,” he said. “However, multiple layered mitigations to address airborne hazards result in a raised situational awareness and achieve an increased range of surveillance. Continued evaluation is needed to address the technology interoperability and data fusion between tracking aircraft with multiple sensors.”

Further information regarding the NASA tests is available here: www.nasa.gov/aeroresearch/utm-tech-docs-papers-presentations

NASA Langley conducted a series of V2V flight tests between 2017-2019 with some promising results according to Aerospace Engineer Louis Glaab. Among these, the 2017 test led to the development of a video processing algorithm that was effective at short range. In 2018, integrating low-power ADS-B with NASA’s integrated configurable architecture for the reliable operations of UAS (ICAROUS) helped to overcome false targets and ‘remain well clear’, and further ADS-B tests in 2019 were conducted with onboard autonomous systems integrated with U-space services. NASA is now testing a hybrid ground-air DAA system that includes multiple sensors combined with ground-based situational awareness and sensor fusion display for beyond visual line of sight operations under 1 mile. 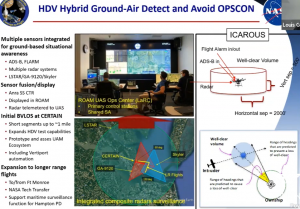 European research is also addressing layered safety systems in an UTM environment. The SESAR exploratory research project Metropolis 2 considers centrally managed operations (like Air Traffic Management), de-centralised separation management, and a combination of these concepts. TU Delft Assistant Professor Joost Ellerbroek said “a little bit of structure works best.” For example, where flight levels are aligned or close to parallel – as in ATM – the likelihood of conflict is reduced. He also highlighted a number of the differences for UTM:

Currently there are about 40,000 daily parcel deliveries in Amsterdam, and as many as 0.5 million every day in Paris, many more than global flight movements.

Metropolis 2 is currently undertaking fast-time flight simulations and plans to demonstrate optimum concepts at a workshop in Valkenburg in September 2022. The aim is to fly a scaled version of trajectories in live demonstration. 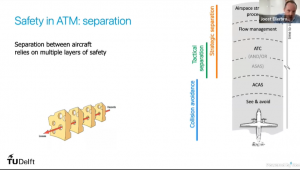 Moshe Cohen explained an effective V2V solution needs to have low latency and high rate of detection, with each and every vehicle transmitting and receiving location data. In flight tests, Ciconia reports prototypes operated successfully at high and low speeds, without false alarms. “We still need to test with multiple vehicles, but the technology prevents mid-air collision between drones and manned aviation. It operates in a narrow bandwidth over a short range (3-4km) so doesn’t need powerful radio.” Importantly, it opens up the opportunity to reduce the reliance simply upon maintaining large safety buffers between vehicles.