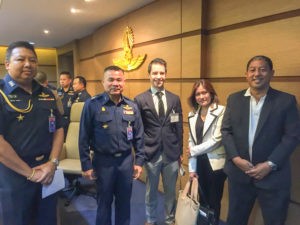 The Civil Aviation Authority of Thailand (CAAT) and the Geo-Informatics and Space Technology Development Agency (GISTDA) have signed a Memorandum of Understanding (MOU) to collaborate on providing loans to domestic manufacturers for the development of the Thai aerospace industry, including the drone sector.

In Thailand there has been great enthusiasm from Thai entrepreneurs and existing service companies to deploy drone technology, whether home-grown or imported, to perform missions within Thai airspace.  However, since the 2015 drone law passed by the Ministry of Transport, most practical commercial drone activities have been effectively rendered illegal unless they obtain special permission.

Over the same time period, since at least 2016, Thailand’s National Innovation Agency (NIA) and its national space agency GISTDA have organized an annual competition, UAV Startup, which offers prizes of about 1,000,000 THB (USD30,000) to domestic Thai hardware manufacturers.

Agricultural (crop spraying) drones, unaffected by the ban on urban drones, are now quite widely used.  Thailand’s agricultural sector produces 8.4 percent of GDP, from 2013 figures, and has been so far the biggest user of commercial drone technology.  Dozens of domestic drone firms service farmers, either charging per day or selling the drones outright, or financing their sale through partnerships with banks.  Several domestic firms make custom agricultural drones, and it is this burgeoning industry that the MOU hopes to encourage and facilitate.

On 18 July 2018, the Royal Thai Air Force (RTAF) hosted the largest drone-related event ever held in Thailand: the Drone Forum.  Featuring a keynote speech from Air Chief Marshal Johm Rungswang, Commander-in-Chief of the Royal Thai Air Force, the one-day event held in Bangkok attracted over a thousand military and civilian participants.  Panel discussions and Q&A sessions were held with the national airspace regulator, the Civil Aviation Authority of Thailand (CAAT).

Given the recent developments within Thailand and its neighbours, I have a very positive outlook for the drone industry in Southeast Asia.  If any organization would like to discuss in more detail, please feel free to reach out.  I look forward to hearing from you.

Fling Co., Ltd. is a drone service provider in Thailand.  In addition to its unmanned aerial logistics platform, the company offers infrastructure inspection software and services and consultation on the integration drone traffic management data. https://fling.asia