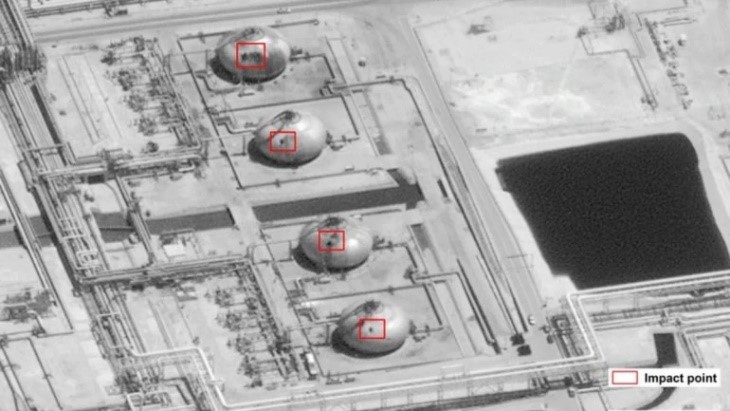 By Tony Reeves of Level 7 Expertise

The recent attacks on two Saudi oil installations have been widely reported to be coordinated attacks by long-range UAVs; the attacks were later claimed by Houthi rebels in Yemen, although the distance from the Yemeni border and the extreme precision of the attacks suggests the weapons were launched from somewhere other than Yemen, and the forces operating the UAVs have achieved an impressive degree of sophistication in ‘route’ and ‘terminal guidance’.

Looking at the satellite image above you can see four hydrocarbon tanks, each marked with an impact point.  The position of each one is interesting; they are close to identical, which suggests a high degree of competence in targeting the weapons.

The use of precision guided weapons in such a role is nothing new, of course.  Western forces used cruise missiles in a very similar fashion in Iraq and Kuwait in 1991 and who can forget the compelling video of a cruise missile flying down a street in Baghdad?

This does beg the question: where is the line between UAVs and cruise missiles?  The media – backed up by Saudi and US Government statements – continue to refer to the attacks as “carried out by drones”.  Given the stated capabilities of the Royal Saudi Air Defence forces, who are equipped with an impressive array of US-sourced systems, including Patriot and THAAD – a system designed to defend against ballistic missiles – it is possible that the attacks might be the result of a weapon system other than a weaponised medium-altitude drones of the Shahed-129 class, which is very similar to the MQ-9 Reaper. Press reports say the US government has located the launch site of the attacks, in southern Iran; the Saudi air defence system was focused on the threat from Yemen, to the south, rather than Iran, to the north or northwest,

But whatever the state of counter UAS defences the attacks must have been carried out using relatively low-flying and difficult-to-detect UAVs, operating in a pre-programmed “fire and forget” mode combined with considerable time and effort spent in intelligence and reconnaissance of the targets, and sophisticated route and terminal guidance.

What does this mean for States wishing to implement counter-UAS strategies?  What is immediately clear is that leaps in guidance technology in recent years can put a long-range UAV, capable of carrying out a pre-programmed precise attack, in the hands of a relatively unsophisticated group – especially when sponsored or backed by a high-capability nation state.  Low-flying targets with low radar cross sections are notoriously hard to detect, and attacks on critical national infrastructure have an impact beyond the explosion and potential loss of life.  This was a clever attack, delivered against sites with little (or no) protection, but one that could easily have been predicted.

(Image: Digital Globe/provided via the US Government briefing