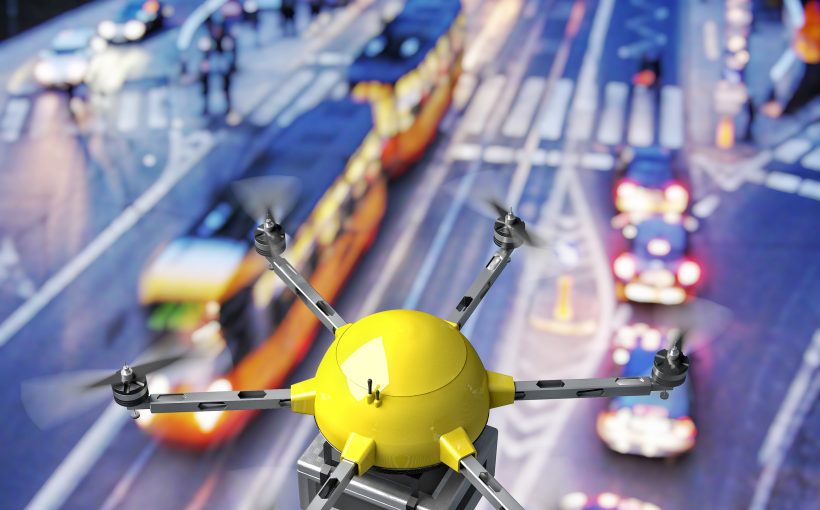 Drones and various Unmanned Aerial Systems (UAS), are becoming increasingly popular. In fact, a 2016 study commissioned by Europe’s Single European Sky ATM Research (SESAR)[1] predicts that their number will grow by 1 million per year up to 7.5 million by the early 2020s. This includes both UAS used for leisure and commercial purposes, where the largest impact is expected to be in agriculture, maintenance and inspections, transport and public safety. The use of UAS in these and additional sectors is expected to create a market value of 10 billion EUR annually by 2035 in Europe alone and create over 100,000 new jobs according to the 2016 European Drone Outlook Study.

It is important to distinguish here between UAS which are controlled directly by a pilot, albeit from the ground, known as RPAS (Remotely Piloted Aircraft Systems) and UAS which are expected to operate autonomously and can be controlled by simple point and click commands or route plotting. This article focuses primarily on the “autonomous” UAS.

The rapid uptake of drones/UAS has caused concern for pilots and the traditional aviation industry, which for many years has had a monopoly over airspace use; concerns which could be well-founded. The number of reported traffic conflicts between manned aircraft and UAS has been rising rapidly. For example, according to the UK Airprox Board, in the UK the number of reported near misses between UAS and commercial aircraft has increased from 6 in 2014 to over 70 by 2016[2], with sightings of drones being reported up to an altitude of 12500 feet MSL[3]. It’s also well-known that many UAS pilots have only a limited interest in airspace. They simply want to operate their vehicles at their leisure, and do not necessarily consider the potential impact of their activities on other airspace users.

Given their popularity, the huge commercial potential, and the benefits they could bring to society, there is little point in trying to stop UAS uptake. The only way ahead and indeed, the only way that high safety levels can be maintained for manned aviation, is to create regulation for UAS use and integrate them into existing airspace and current air traffic control systems. Indeed, the 2016 European Drones Outlook Study indicates that, in order for Europe to remain competitive in the global drone landscape, basic integration should happen by 2021.

So what needs to happen to integrate drones into the current airspace successfully and safely, and unlock their full commercial and societal potential?

As mundane as it might seem, appropriate regulation is critical. Traditionally, safety matters in aviation are regulated by legislation, via national and supranational authorities. Rules relating to the operation of manned aircraft depend on the aircraft’s size, use, performance and the resulting safety risk they create. There is no reason to expect that such an approach will not be effective for controlling UAS.

It is crucial however that any rules created for UAS are harmonized between various countries. This is an important prerequisite for creating a common UAS market and avoiding chaos caused by divergent rules and classifications across geographies, especially in places such as Europe, where multiple countries occupy a limited land area. So far, no single supranational authority regulating drone use is present, however both the FAA and EASA are currently busy establishing appropriate harmonized standards.

An important consideration in all this is the ultra-fast rate at which the UAS industry is developing. UAS products often have a one to three-year life-span and are typically developed by technology actors whose product development cycles are usually not longer than three years. It is currently not clear how regulators used to the relatively slow rate of change in the manned-aviation industry, which is primarily driven by safety-of-life, will adapt to the rate of change expected by the UAS industry. The latter is much more aligned to quick software and digital technology development cycles, as well as advances in technological capability.

Though important, regulation is only one component which will allow the successful integration of drones into airspace. UAS operations will have to be appropriately organized in the future as well. To do this successfully there are some critical areas that must be agreed: airspace organization, separation between manned and unmanned aviation, flight coordination and collision avoidance.

Currently (at least according to law) UAS usage is limited to 400 feet or below in countries such as the US, UK and much of Europe, avoiding the altitudes used by traditional manned aviation users. Given the expected number of drones and the multitude of ways in which they are expected to be used, this does not seem to be a realistic constraint in the future. New classes of airspace accessible to autonomous UAS might have to be created. Eventually it might even be possible (and necessary!) to fully integrate UAS traffic with manned aviation in what is today’s controlled airspace. Airspace classification might become much more dynamic, changing depending on UAS traffic levels and requirements of manned aviation users. Such a dynamic system would have to be automated to a degree.

Given the expected high number of UAS, automation will not only underpin airspace organization but UAS traffic control as well. In fact, automated UAS control systems are already being developed both in the US and in Europe.

NASA was the first to start developing this kind of control and separation system. They dubbed theirs UTM (UAS Traffic Management). UTM is focused mostly on keeping UAS and manned aviation separated, as well as ensuring that no traffic conflicts exist between UAS. It is expected that UTM will be rolled out in several iterations, with subsequent iterations able to handle increasingly complex environments through increasing automation. Eventually UTM is expected to handle flights anywhere in the country, from the rural countryside to high population density urban environments. To enable this, a registration system for UAS will be necessary. Drones will have to conform to certain standards before they will be able to enter UTM controlled airspace. For example, the UTM system will check if a particular UAS is built to an approved performance standard before it redirects it to an urban environment where any emergencies could have a high potential to cause disruption and create safety concerns.

Europe is also laying the foundations for its own UAS traffic control system and working on a UTM concept called U-Space. U-Space is even more ambitious then NASA’s UTM. The concept of U-Space envisions that eventually it will be possible to seamlessly share the same airspace between manned and unmanned aviation users.

The inevitable result of UTM and U-Space is a much more dynamic airspace. Such systems will be able to establish dynamic geo-fences for UAS where necessary (for example in case of unexpected diversions of manned aircraft or helicopter emergency flights). It is also conceivable that sometimes UAS might get priority over manned aircraft (for example when transporting vital cargo).

Autonomously operated aerial vehicles and spaceships have been around for years (the US military pioneered large scale semiautonomous operational UAV use in the 1960s), and control systems for autonomous aircraft could already easily handle most types of autonomous UAS flights. Today, even relatively cheap consumer grade drones have ‘return to home’ and ‘autoland’ features. Control systems are, therefore, not a constraint for the adoption of autonomous UAS.

The issues are firstly the sheer number of UAS flights that would have to be controlled, and secondly ensuring that appropriate separation is maintained. To ensure safety, any UTM type system will need accurate position information for both UAS and manned aviation traffic. For manned aviation, positioning systems such as ADS-B work very well. However, it is far from certain that they could be successfully used in UAS. This is both due to the difficulty of decreasing the hardware size to make it suitable for use in drones and ensuring that a high number of concurrent users can be supported in a limited airspace volume. For instance, given the high number of drones envisaged, the communication protocols might quickly become saturated. Another factor is that systems such as ADS-B are geared towards aircraft, which are typically faster and fly higher than many of the UAS types expected to be used in the future.

A positioning system such as GNSS could be a viable solution, especially since it is proven, in use operationally, and multiple mass market receivers exist already. However, even if GNSS is used to obtain positional information the data still has to be relayed to the UTM system. It is not yet clear how this could be achieved. One possibility is that systems such as 4G/5G GSM might be adapted to relay UAS positional information.

Finally, in cases of unexpected flight route changes, standardised ‘detect and avoid’ technologies for UAS to UAS, and UAS to manned aircraft, will have to be developed. Here, systems developed for other autonomous vehicles (such as cars) could be useful. But it is far from clear how cross-compatibility and common standards for such systems would be assured for different types of UAS.

Apart from purely technological issues, psychological barriers might also slow down widespread UAS adoption. It is not clear how quickly (if at all) people will accept autonomous control of services such as UTM control of drones, personal air taxis and/or eventually manned aviation. Drones can cause concern to people they overfly. In the US, there have already been instances of drones being shot down by annoyed residents.

UAS are creating significant disruption in the aviation industry, and there are still questions to be answered as to how (and whether) to integrate them into air traffic control. Regulation, and widespread adoption of automated systems (enabled by new technology) will be necessary to maintain aviation safety levels, even though many new airspace users are present. These fundamental changes create significant opportunities for new market entrants and will no doubt have a major impact on how we think about airspace, as well as our daily lives.

About the author: Piotr Sirko is a consultant with Helios, the aviation consultancy of Egis. During his time at Helios he has worked on the implementation of novel technologies within aviation and is especially interested in how UAS will change the aviation landscape. Piotr is also a glider pilot and before joining Helios completed a PhD at University College London.