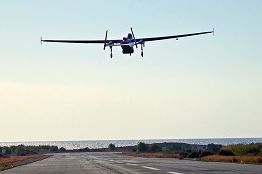 Flying for FRONTEX, the European Border and Coast Guard Agency, the maritime Heron performed a series of flights equipped with an electro-optical payload for day and night vision, a marine radar made by IAI and an automatic identification receiver. Each mission lasted 14 hours on average. The surveillance platform Heron 1 used a direct link when flying within Line of Sight (LOS), switching seamlessly to a satellite link when flying Beyond Line of Sight (BLOS) to transmit real time information to multiple users in real time.

IAI and Airbus were selected by FRONTEX in a contract that includes operating the RPAS in daily security and coastal guard missions, maintenance and more. IAI and Airbus will provide the service for pre-planned assignments as well as for ad-hoc calls. The current contract covers 600 flight hours and may be extended into a longer-term agreement.