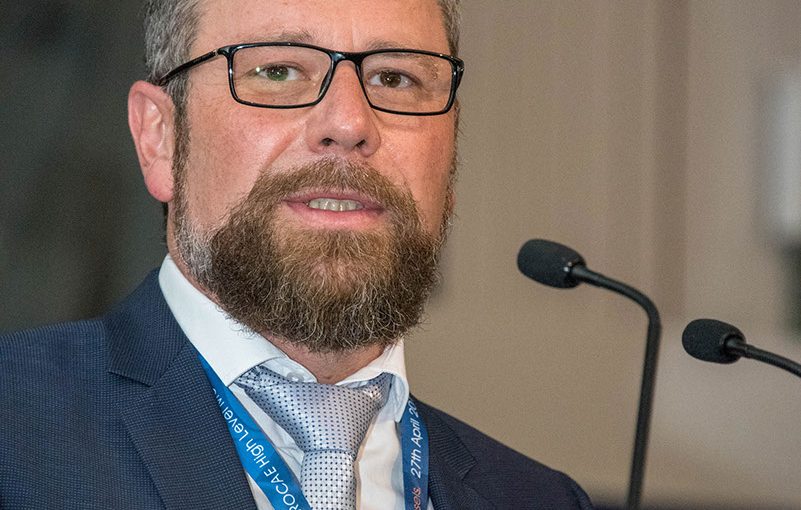 Christian Schleifer-Heingärtner is Secretary General of EUROCAE, ​ the European leader in the development of worldwide recognised industry standards for aviation.

You have quite an aggressive work programme of developing standards for remotely piloted air systems (RPAS) operations in Europe.  Is the work on schedule?

We are within an acceptable level of tolerance. It’s an ambitious work programme and the work is split into six sub groups so we are supplying quite a few resources to support them. But yes, we are mainly on track. Some of these deliverables are moving a little behind schedule but not the major ones and we are updating the schedule of the work programme accordingly. And let me reflect on your opening words: We are developing standards for Europe but EUROCAE is an internationally recognised organisation and our standards are used globally.

How closely do you work with standards organisations such as RTCA and others to develop a global understanding of what we need to do in UTM?

RTCA is one of our main partners. Fifty per cent of our activities are joint with RTCA, which means that the working groups are really working together and publishing technically identical standards.  It also means that for certification purposes the use of the standard is automatically accepted on both sides of the Atlantic. But we also have agreements with other standardisation organisations; the industry puts a lot of pressure on us not to waste resources, making sure that we don’t have overlapping activities.

We are also working within the European UAS Standards Coordination Group (EUSCG) (www.euscg.eu), a European platform where all the drone standards-developing organisations and the regulator sit together, to coordinate a joint rolling development plan. This describes what kind of activities are ongoing, what kind of standards are already developed and published and how they fit into the regulatory framework.

So that means it is now possible to understand how you comply with new regulations – what guidance is available and what are the acceptable means of compliance.

The timetable for the European Union’s U-Space foundation services doesn’t seem to fit with the roadmap for standards – how are all these organisations going to work together with all these different deadlines?

The first step of the U- Space includes two essential services of functionality which are e-registration and geo-fencing. We have two groups dealing with these and there are some other organisations which also contributing to geo-fencing.

The e-identification work has a second element which is the regulation focused on the security standpoint of drone identification, which makes reference to EC marking. And here we have a small overlap. We are working with the European Commission on this – one part is really driven by the vision target set by DG MOVE while the EC marking is covered by DG GROW. We can’t publish directly standards that are necessary for EC marking and that is a gap we want to close.

Our organisation has just nine employees. So the really smart experts actually developing the standards are coming from the EUROCAE members. We are driven by our members and we have currently 2,000 experts registered for the different activities. So they normally trigger the standards process and say – “you know what? I think EUROCAE should make standards about this and that,” and they scope it a little. Then, they write the discussion paper and we say “yes – that makes sense” and have a call for participation. This enables us to ensure we have enough expertise to perform the work. It doesn’t make sense to have two people in a working group both developing a standard – instead, we do need to have a variety of experts around the table, more than a single supplier and operator and  these different inputs confer the quality of the standards.

So normally we never work on something that hasn’t been seen before and in most cases considerable research and development work has already been done. So even though it looks as though there is nothing in production – because standardisation works in parallel with industrialisation – we can go ahead once industry is ready to develop the product.

The commercial drone industry seems impatient to get going – what sort of pressures are you under from industry to develop workable standards as soon as possible?

We are the industry, we develop industry standards, and if the industry needs a standard it would trigger the existing process. We are here to support the industry and to provide the platform for this.

We have to make sure we are providing them with the right forum and reaching out to the right audience because, with drones, it’s not just the conventional aviation community participating in the process. We have microprocessor manufacturers and developers involved; software developers; mobile network providers and other new stakeholders. They’ve never worked in aviation before so we have to make sure that we are paving the way for them.

And it’s been a different process for us, too.  We organised a large workshop and invited all those parties we knew who had a stake in the drone business. Then we started to shape the work programme with the industry and the regulator and agreed on the priorities. We could see this was a totally new world so we had to change the structure of how we develop standards. We also changed our membership scheme to address and to accommodate more small and medium-sized enterprises; before it had been built around the big players but now we have adapted the structure to include very accessible membership fees.

What’s different in the structure?

We are not developing standards in isolation – it’s a matrix organisation which is all risk-based, performance-based and operational-centric. That goes through all the different categories: open, specific and certified. The whole working group on RPAS and UTM has an umbrella of six different sub-groups. We try to ensure the bigger picture is understood and as we break the programmes down into smaller groups we make sure they are talking to each other in the different subgroups.

Performance-based standards – can you explain in terms of drone and UTM standards what that actually means.

Standards become increasingly important for the overall compliance of the regulatory framework. When you talk about performance-based standards, they define the performance of a functionality but do not specify the technology. So that makes sure that not one solution is preferred to another.  It defines the speed range, the altitude of operation and the scope of surveillance required but it doesn’t say what kind of engine you must use to achieve this or what kind of surveillance equipment you need.

So who would actually set that standard – for example, for detect and avoid?

Normally the working group itself. Even though we are producing industry standards the regulator is mostly or even always a participant, especially when the regulator intends to make reference to our standards.

Don’t forget the regulator normally has considerable experience in setting these kind of performance levels. We have a super-safe system in aviation, so we know exactly what kind of level of safety we have to apply – at the probability of 10 to the minus 9 of an accident, for example.

What’s the process for developing a standard?

When a group of experts agree on a draft version of a standard, we have an open consultation. We invite all members but also the public to comment on it and that adds a lot of value to the document. So organisations which do not have the capacity or the expertise to participate in the development process can read through the draft and comment. Every comment needs to be considered, analysed, and there needs to be a response. This adds another layer of quality to make sure that we understand the needs of each organisation impacted by the standards. On a recent document on cyber security we had for example 1,300 comments. If there is really strong disagreement we have a dissenting process we go through before we reach a conclusion. So it’s very process-driven.

I previously worked for ICAO and the process of develop standards here is very similar to how ICAO develops its SARPs and PANS, which are transferred into the national regulations of every Member State.

Everybody who wants to participate, can. At the end of every proposed standard there is a formal approval process. The council is responsible for signing off the standard and ensuring all of the procedures and processes have been followed. Each working group activity has a key performance indicator and these are reported to the council at least every six months so they see exactly what’s happening. We report all of the progress of the working groups to the council at every meeting, with the key performance indicators under the scrutiny of the Technical Advisory Committee – the TAC. So there are several checking functions behind everything.

So what’s the timescale in terms of developing standards for drones and UTM, from the start to final certification?

End-to-end we can be as quick as one year – from the idea, from making a proposal, to developing a standard and it being approved, from populating the working group with experts until it’s published.

But the development process really varies on the topic itself, depending on the difficulties they see, the different solutions, the work involved. It is a consensus-driven approach and that’s a process we have to respect. But it can take up to three years in the working group if there is no real push.

We have already delivered a couple of standards for drones – for automation: auto-return, auto-taxi and auto-land. I think they were done from starting point to publishing within 16 months.

The expected standards for SESAR solutions are now well covered, and are reflected as part of the ATM masterplan. We have an early identification of what needs to be done. SESAR shares this with us so we can make sure this work is in our technical work programme. As soon as SESAR research results are ready, this usually provides the input into our standardisation activity.  That works well.

The challenge is the perception that standard-making process is too slow. But I think quality goes before speed, and we need some kind of stability so that we can be sure the requirements will not change every day as new technology comes onto the market. We have to stay at performance-based level to allow technology to develop, for public safety to be assured, and for industry to have standards available so it can keep developing, while we ensure we are not duplicating work which is taking place elsewhere, Europe-wide and globally.

And this brings me back to your other question – the coordination work. We are also participating on RPAS panel within ICAO.  ICAO wants to take industry standards increasingly into account in the future. We are recognised by ICAO as an international standard developing organisation, and thirty per cent of our members are non-European.

Do you want to develop a wider global footprint? Is that part of your mandate?

Absolutely it is.  We are an internationally recognised organisation already, and the goal of our council is to expand our global footprint.