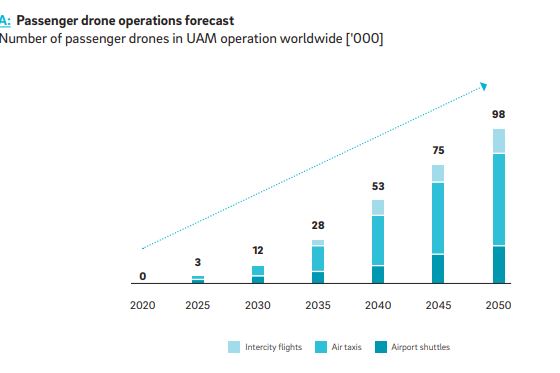 Roland Berger’s November report on the Urban Air Mobility market (Urban air mobility The rise of a new mode of transportation) forecasts that close to 100,000 passenger drones could be in the air worldwide by 2050. “Something like 100 cities worldwide will have implemented drone services to provide a variety of passenger transport services by then, with on average 1,000 passenger drones in operation in each city. However, there will be a large spread of drones per city ranging in 2050 from 60 drones for the smallest metropolitan areas to more than 6,000 in the largest ones. Based on this scenario, drones will become an integral part of urban (and supra-urban) mobility offerings over the next three decades.”

According to the consultant, three key developments over the next decade will be instrumental in shaping the evolution of the UAM market: Improvements in battery technology and new forms of electric propulsion will increase flight ranges from 20 to 30 kilometers today to more than 100 to 250 kilometers by 2030.

“In our opinion, the rough timeline for these developments will look something like this:

In terms of the regulatory challenge, Roland Berger says:

“One of the key hurdles right now is the absence or very immature status of regulations worldwide. As things stand, there is no dedicated body of law in place to govern the operation of drone taxis. Yet a comprehensive regulatory framework will be essential to guarantee the safety of people, infrastructure facilities and third-party property. This will clearly be another crucial success factor if the UAM market is to take wing. Such a regulatory framework should, in our opinion, address four key safety concerns: avoidance of possible mid-air collisions, prevention of injuries to people and damage to properties as an outcome of possible crashes, and avoidance of privacy breaches. Its inevitable objective is therefore to regulate the certification of vehicles, operators, air traffic management (ATM) and, indeed, the entire airspace for UAM services.”