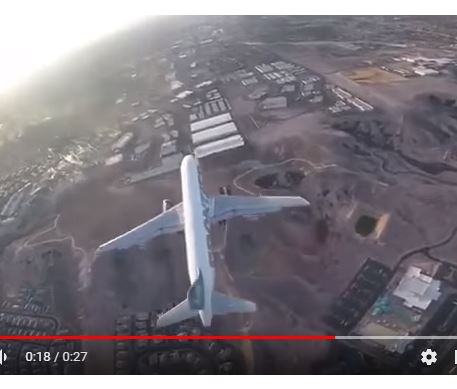 The posting on the internet of a video, which has gone viral, of a near collision between a Frontier Airlines airliner near McCarran International Airport in Las Vegas and a drone could well have acted as catalyst to the Federal Aviation Administration (FAA) speeding the introduction of tracking and identification devices on drones.

Here is the text of the letter:

We are deeply concerned about a recent video that was posted on the internet that shows an unmanned aircraft system (UAS) flying directly above an airliner making its final approach at Las Vegas McCarran International Airport.

This action by the UAS operator was not just irresponsible and in clear violation of both the FAA’s Special Rule for Model Aircraft, 14 CFR, 101, Subpart E and Part 107 of the Federal Aviation Administration regulations, but it also endangered the airspace and created the real risk of a midair collision with a passenger jet.

This careless and reckless behavior endangers the safety of our airspace for all users – both manned and unmanned. We urge the FAA to use its full authority to investigate, identify, and apprehend the operator of this UAS flight and prosecute them to the fullest extent of the law. We also encourage the FAA to work with law enforcement in Las Vegas and Nevada to pursue all applicable charges within their authority.

Strict enforcement will not only punish the operator responsible for this unacceptable and reprehensible action, it will also serve as a deterrent to others for misusing UAS technology and create accountability among UAS operators. Collaboratively, our organizations will continue to educate UAS operators about where they should and should not fly to help prevent similar incidents in the future. We will also continue to work closely with the FAA to develop and deploy remote identification and tracking to ensure our airspace remains safe and secure.