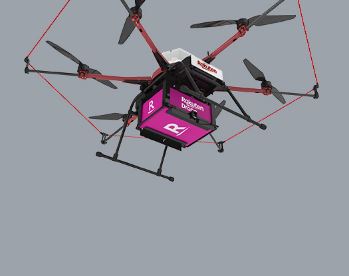 Asia Nikkei reports that Rakuten, a leading e-commerce platform in Japan, will start delivering packages via drones to rural areas in April, now that the country has eased regulations on such flights.

At the end of January, said the news report, Rakuten conducted a trial in Chichibu, a city north of Tokyo surrounded by mountains. “The drone traveled 3 km to deliver barbecue equipment to a hypothetical customer who lives within the mountainous terrain. The drone operator simply entered the location into a tablet — the rest of the roughly 10-minute flight was automated. Rakuten’s prototype is capable of carrying a maximum of 2 kg and traveling up to 15 minutes. Tokyo Electric Power Co. Holdings assisted with the trial by installing weather sensors on power transmission towers and near electrical lines. Such real-time data as wind speeds and directions are transmitted to the drone via the tablet to ensure a safe flight.”

The news story continued: “Japan currently forbids drone flights in urban areas and everywhere at night. Drone operation was once limited to unpopulated areas and within the pilot’s line of sight. But regulations were relaxed last September, expanding the range of flight. In addition to Rakuten, Japan Post Holdings is also testing drone deliveries….In Japan, the drone business is expected to total 371.1 billion yen (USD3.38 billion) in fiscal 2024, or seven times the scale in fiscal 2017. Starting next fiscal year, requirements will be relaxed for drones used to inspect tunnels, bridges and other infrastructure — a move expected to stimulate demand.”

Rakuten has partnered with AirMap to provide aUTM platform which organizes low-altitude airspace data, including regulations and advisories, weather, terrain, and other mission-critical information to enable safe and efficient drone operations.