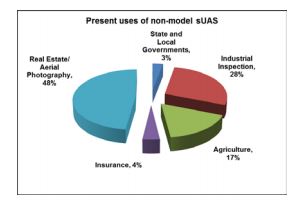 The US Federal Aviation Administration (https://www.faa.gov/data_research/aviation/aerospace_forecasts/media/Unmanned_Aircraft_Systems.pdf) is predicting drone numbers to increase by 400% to 2022 – but slowing down beyond then. Professional drone numbers however “will likely be phenomenal,” according to the agency.

“By the end of May 2017, more than 772,000 owners had already registered with the FAA. While mandatory registration was in effect until the last week of May 2017, the trend was one of slowing growth over time,” said the FAA.

“Since the launch of on-line registration, more than 110,000 commercial operators had registered their equipment by the end of 2017.”

“Last year, we forecasted that the non-model sector would comprise approximately 108,000 aircraft in 2017, a growth rate exceeding 150% from the base of 42,000 in 2016. Actual data indicate there were 110,604 UAS registered at the end of 2017. Considering the trend observed in the registrations, expert opinions provided during the TRB workshops, review of available industry forecasts, internal research, and market/industry research, we project that the non-model fleet by 2022 will likely (i.e. base scenario) be four times larger than the current number of non-model aircraft. As the present base (i.e. cumulative total) gets larger, we anticipate the growth rate of the sector will slow down over time as well.”