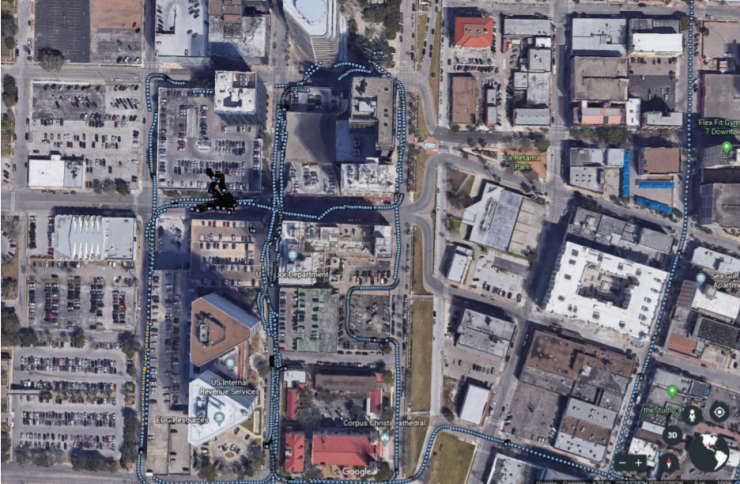 There is sufficient accuracy and reception of GPS navigation satellites to obtain a fix within acceptable error limits within “urban canyons”, according to recently published results of a NASA UAS traffic management technology capability level four (TCL4) demonstration Operational Considerations of Small UAS in Urban Canyons within the Lone Star UAS Center of Excellence and Innovation.

According to the final report from the test:

“There is a general lack of in-situ data to confirm the capabilities of small UAS (sUAS) to operate in an environment where there are significant structures surrounding the flight path of the sUAS. As a prelude to the NASA UTM TCL4 testing to be conducted in downtown Corpus Christi, Texas, a series of experiments were performed to determine performance characteristics of key sUAS systems in the environment for the tests. Specifically, the performance of the sUAS GPS navigation and the GCS control and telemetry links to the sUAS were tested in-situ on the routes expected during the NASA tests. The preliminary analysis of the data taken indicates that it is feasible for the sUAS to operate in the urban canyon. While performance is degraded relative to an “open air” baseline, it appears there is sufficient accuracy and reception of GPS navigation satellites to obtain a fix within acceptable error limits. In addition, the telemetry experiments indicated that loss of point-to-point RF links in the ISM band are likely when operating BVLOS from the GCS/launch point.

The research results have been highlighted by NASA UTM Project Chief Engineer Joseph Rios in a Linkedin post.

“The ground observations taken during the first experiment represents a “worst case” scenario for GPS satellite visibility. This is simply a function of how many satellites are blocked from direct line of site to the GPS receiver because of buildings on one or both sides of the roadway. Because of this, it was expected that the system would perform better at the altitudes being used for the flight tests. This expectation was confirmed during flights in the actual urban canyon…. The flight path consisted of a takeoff and climb out, hover and two box patterns then landing….The majority of the flight had a 95% confidence level of less than 2m….Much of the flight path flown by the autopilot was within 5m of the “truth” position reported by the RTK (Real Time Kinematics – a correction signal to achieve very high accuracy GPS guidance) unit. Some parts of the flight path showed less than 1m difference, and a few points near the takeoff and landing point that were 5m. It is surmised that the RTK corrections start becoming less effective the closer the rover unit is to the base station.”

An important area for future research is the development of a highly reliable command and control link between operator and vehicle, said the report. “Furthermore, for point-to-point RF links, a determination of a suitable “safety critical” RF spectrum band will be necessary. Additionally, work will be required to prioritize communication links such that deterministic selections can be made for which modality is the current link using under what circumstances. Other future work should include alternative positioning system development such that the errors associated with GPS satellite signal blockage can be mitigated. This might include optical position systems, alternative groundbased geo-spatial positioning systems, cellular 5G positioning, and others.”