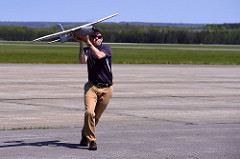 NASA has joined the Northeast UAS Airspace Integration Research Alliance (NUAIR), a 50-mile unmanned traffic management corridor linked to the NUSTAR UAS test facility. According to New York State governor Andres Cuomo’s office: “The announcement was made prior to a demonstration of the first phase of the UTM Corridor in operation, a breakthrough infrastructure asset intending to unlock beyond-visual-line-of-sight commercial operations. That exhibition highlighted the State’s commitment to the burgeoning industry and what has become the most advanced drone testing corridor in the nation.”

The development of the drone corridor is expected to unlock a trillion-dollar global industry and attract businesses development and new drone technology to the state. SRC Incorporated plans to initially hire 50 engineers following its announcement of a USD65 million contract with the US Army to develop a system to detect and defeat small drones. Additionally, the company plans to add up to 1000 new hires over the next five years thanks in large part to the state’s investment in the UAS industry.

At the NUAIR-managed test site in Rome, 645 test flights have been conducted at the test site this year, a tenfold increase from the year before. In 2016, Empire State Development invested USD30 million in the 50-mile drone test corridor between Syracuse and Rome in the form of a CNY Rising Upstate Revitalization Initiative Grant. Governor Cuomo has also invested USD10 million in GENIUS NY, one of the world’s largest business competitions focused on unmanned systems, cross-connected platforms and other technology-based sectors. In 2015, as part of the round four CFA, the State invested USD4 million to install state-of-the-art surveillance and airport surface radar equipment at Griffiss Airport.

New York State also made a related USD5 million URI investment in Gryphon Sensors, a company based in Central New York that has developed a state-of-the-art mobile UTM system called Mobile Skylight, which provides three dimensional detection of low-flying, small, UAS at a distance of out to 10 kilometers. The unit

Lawrence H. Brinker, interim President and CEO of the NUAIR Alliance, said: “The successful launch of the drone corridor marks the first of its kind in the nation, sending an important message about our region’s leadership, innovation and commercialization capabilities in this sector. Further coupled with the investments made by New York state, the region is positioned to be the single best place for the research and development associated with growing the UAS sector “Through this project, the region is advancing detect and avoid technologies critical to integrating UAS into the nation’s commercial airspace. We are excited to begin collecting and analyzing data and supporting businesses as they test groundbreaking technologies and grow their companies in Central New York.”

Local educational institutions are also working to further drone industry efforts in the region. Both Syracuse University and Mohawk Valley Community College have aligned training curriculum and research efforts around the growing needs of this sector. New York State is also sponsoring Round Two of the GENIUS NY programme in the region; one of the largest startup business accelerator programs in the world that caters to business proposals in the categories of Unmanned Systems and Data to Decisions Applications.