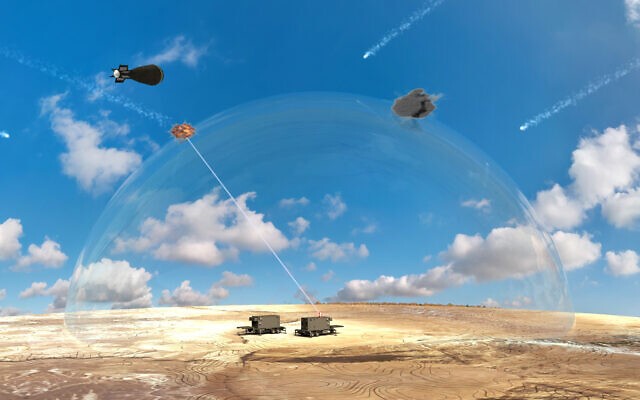 According to the Times of Israel: “According to the ministry, the development of this laser system was possible due to a recent unspecified “technological breakthrough,” following years of investment in research efforts by defense contractors and academic scientists. The futuristic defense system is only in the early development stages and won’t be operational in the near future, the ministry said…. each system would have a high up-front price tag — in the hundreds of millions of dollars — but minimal cost for each use, meaning it would eventually become cost-effective. The head of the Defense Ministry’s Weapons Development and Technology Infrastructure Administration (MAFAT), Brig. Gen. Yaniv Rotem, said each firing of the laser would cost approximately one dollar — not including the cost of the system — compared to the tens of thousands of dollars that each Iron Dome interceptor missile costs.

“So long as it were connected to electricity, the system would never run out of ammunition — a potential problem for the Iron Dome, which can only carry a finite number of interceptor missiles. The downside of a laser system is that it does not function well in times of low visibility, when there is heavy cloud cover and other inclement weather, the ministry said.

“According to the ministry, in the coming year, MAFAT, working with the Elbit and Rafael defense contractors, will create three versions of the laser system: a static ground-based system that can be placed along Israel’s borders to protect nearby communities; one that can be loaded onto a mobile platform in order to defend troops in the field; and one that can be attached to aircraft in order to both work around the visibility issue by placing the system above the clouds and to dramatically extend the system’s range.

“This is a dramatic solution to rocket fire,” said Dubi Oster, head of the DDR&D Optronics Department. “We have been working on this for years. But it is challenging to get a good-quality beam to stay the size you need at the range you need… for example, a beam the diameter of a coin from here [in Tel Aviv] to Herzliya.”

“…While most developments over the years – both in Israel and abroad – have been ineffective, significant achievements have been made over the past year and a half as a result of collaboration between the ministry and defense companies, including Rafael and Elbit Systems, as well as academic institutions. The breakthrough recently made by the ministry is based on the precision of the laser beam, which can be focused on long-range targets and which can overcome atmospheric disturbances such as clouds and dust storms.

“According to Oster, the ministry was able to take several laser beams and, with an advanced algorithm, connect them to get one strong beam that is able to intercept and take down a variety of threats. Based on high-energy electric lasers rather than chemical laser technology, the robust system will complement the other layers of Israel’s aerial defenses and will be a strategic change in the defense capabilities of the state, the ministry said.”