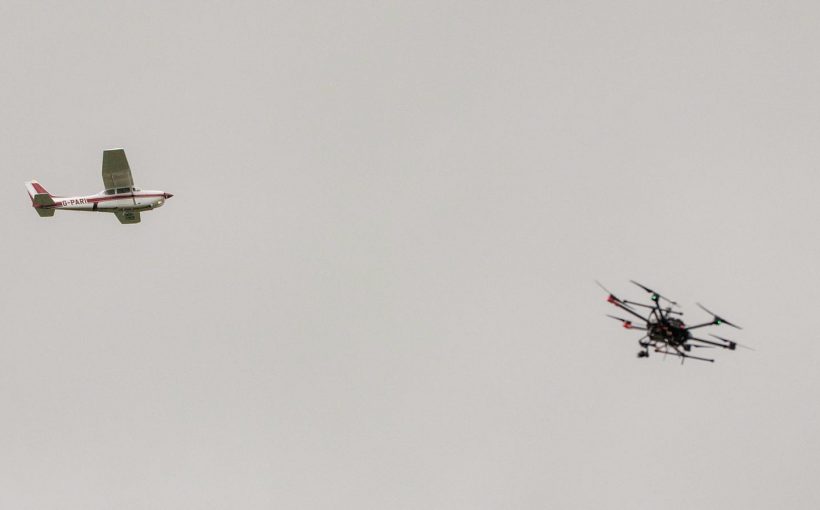 The first flights involving manned and unmanned aircraft sharing the same airspace have taken place at Waterford Airport, Ireland, as part of the U-Flyte UTM research programme (Maynooth University receives EUR6 million to fund UTM research). On 14 September, a Cessna 172 was flown in proximity to a drone operating near the control tower, with both aircraft under visible control of the tower controllers.

“This is the first stage in a progressive implementation of demonstrators,” said Maynooth University’s Dr Tim McCarthy, “with the end goal of developing a practical, responsible example of a U-Space UAS traffic management system. We are looking at how an integrated UTM/ATM system could work, first from the point of view of the manned aircraft pilot, starting with putting simple physical illumination lights on the drone and then gradually introducing primary radar, ADS-B and then automated detect and avoid systems.”

In this initial trial the controller, the Cessna pilot and the research team co-located with the drone operator were in three-way radio contact. The drone and the Cessna flew pre-determined routes above the airfield, with the drone flying initially within 50m to 100m from the tower and at around 170ft altitude, to stay within sight of the tower.

The drone was also equipped with an ADS-B 1090 transmitter which was monitored on the ground and in the Cessna aircraft. A traffic alert was signalled in the cockpit every time the Cessna turned towards the drone.

“This was a first opportunity understand how the components of a basic UTM system work from the perspectives of the controller, the manned aircraft pilot and the drone operator,” said Dr McCarthy.

Coordination of this manned/unmanned integration airspace test was provided by Waterford ATC and conducted at U-Flyte’s primary drone test-site at Waterford Airport. U-Flyte is a Science Foundation Ireland (sfi.ie) funded project and includes partners from Airbus, Irelandia Aviation and INTEL