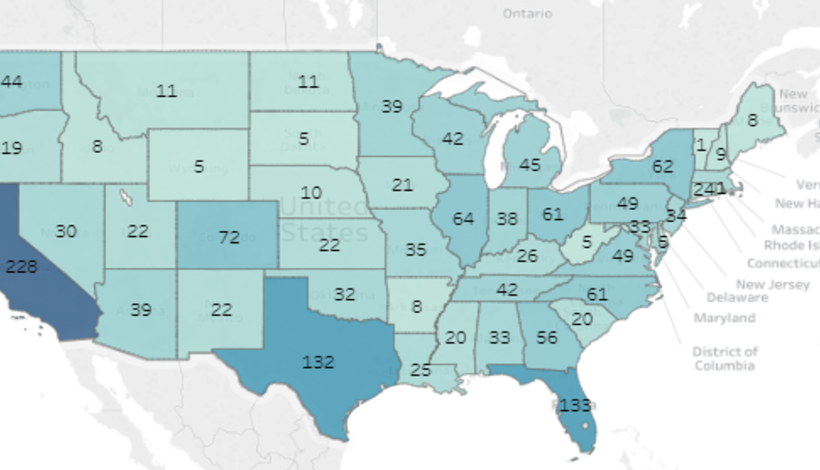 The Association for Unmanned Vehicle Systems International (AUVSI) (https://www.auvsi.org/new-auvsi-report-nearly-2000-waivers-granted-operate-beyond-part-107) has released an update to its analysis of waivers by the Federal Aviation Administration (FAA) for UAS operations beyond the scope of the Small UAS Rule and found that nearly 2,000 have been granted over the last two years. Among the key findings are the administration has granted just 23 beyond-visual-line-of-sight (BVLOS) waivers over this period.

“The analysis finds that nearly 92 percent of the waivers grant permission to operate UAS at night, which is not permitted under the FAA rule. The report also shows that first responders around the country are embracing expanded UAS operations, with close to 200 having received waivers.

“Effective Aug. 28, 2016, Part 107 to Title 14 of the Code of Federal Regulations, also known as the “Small UAS Rule,” created a uniform regulatory framework for UAS. Among the rule’s requirements, UAS must fly below 400 feet, within visual line of sight and during daylight hours. Recognizing the need for the rule to be flexible to foster innovation, the FAA created a waiver process that allows for expanded types of operations, such as night-time or beyond line of sight operations, with the approval of the agency. As of Aug. 15, 2018, operators in all 50 states and Puerto Rico have used waivers for expanded operations. The operators who received the most waivers reside in California, followed by Florida, Texas, Colorado and Illinois.

In its report, AUVSI analyzed 1,960 waiver documents granted to more than 1,800 operators in the past two years. In addition to night-time operations (1,800 waivers), the FAA has granted waivers to:

Of the over 1,800 unique operators who were granted waivers, almost 60 percent (1,069 operators) were associated with a service-based companies. They operate in a range of markets including professional inspection and photography, surveying, construction, and utilities. Other operators were:

Of the waivers granted to companies, over 90 percent went to small businesses with annual revenues of less than $1 million. Businesses use UAS for a number of different reasons, including aerial photography, surveying and critical infrastructure inspection, while public safety organizations have used the technology to gain situational awareness of wildfires, and missing persons, and save time and money on routine tasks like car accident investigations.

A Notice of Proposed Rulemaking (NPRM) for flying over people was scheduled to be issued more than a year ago, but this next regulatory step has been indefinitely delayed due to security concerns. Remote identification is viewed by the industry as the linchpin to advancing UAS integration by providing a way to identify and track operators and owners of UAS flying in the airspace in real time. However, an NPRM for remote identification is not expected until next year, and a final rule is still in the distant future.

According to AUVSI President and CEO Brian Wynne, more than 170,000 platforms have been registered for commercial purposes and more than 100,000 people have obtained their Remote Pilot Certificates. “Once remote ID and an expanded regulatory framework are in place, there is no doubt that this technology will positively impact businesses across a number of sectors,” he said.