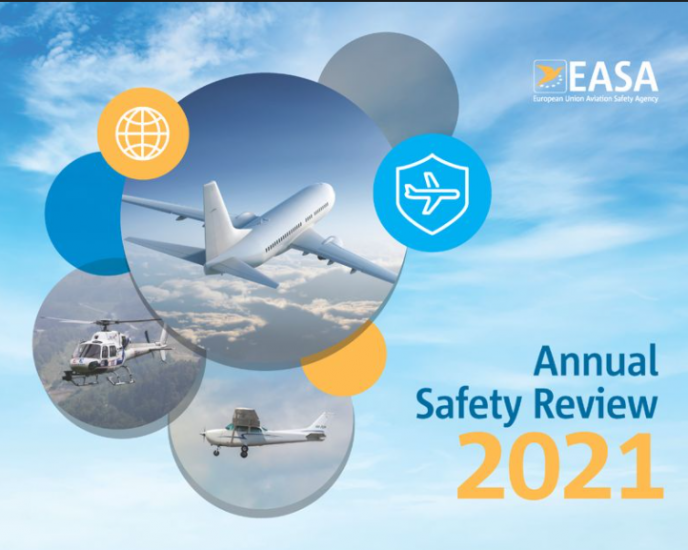 The European Union Aviation Safety Agency (EASA) in its latest 2021 safety report shows a significant drop in the number of airborne collisions involving drones/unmanned air services (UAS) in 2021 over 2018. In 2020 there were just three reported incidents – one more than 2019 but considerably less than the 12 recorded in 2018.  The reduced number of commercial air transport (CAT) aircraft flying in 2020 could be one of the main reasons for the drop in reported incidents.

The numbers are so low and reporting mechanisms (dependent on manned aviation and ATM reports) in such short supply during 2020 that it is difficult to make fundamental conclusions about the evolving safety threat. It is impossible to be sure whether 2018 was an aberration or part of a long term trend. The fact that commercial air transport movements in 2020 were so much lower than in 2019 yet the drone collision/near-collision incident rate still increased could well be a cause for concern – though EASA makes some provision for this in its calculations. The occurrence rate for drone collisions/near collisions was higher in 2020 than in 2019 (and 2017 and 2016) and the integration of drones within traditional airspace is now number four on EASA’s list of risk rankings. 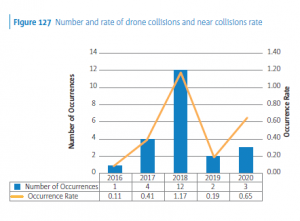 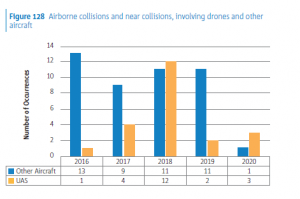 In 2018, according to EASA figures, drone collisions and near-collisions accounted for more airborne incidents than manned aircraft operations.

“It is important to note that UAS-related reports are mainly provided by the CAT aeroplanes and ATM/ANS domains. As soon as reports from UAS operators become more common, the issues relating to this type of aircraft will become clearer,” says EASA. “The potential for an airborne collision between UAS and other aircraft is an area of growing safety concern, due to the increasing accessibility of UAS. In 2019, the Commission Implementing Regulation (EU) 2019/947 setting out the rules and procedures for the operation of unmanned aircraft was published.” 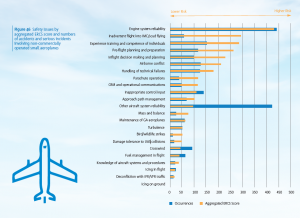 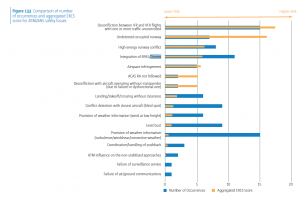