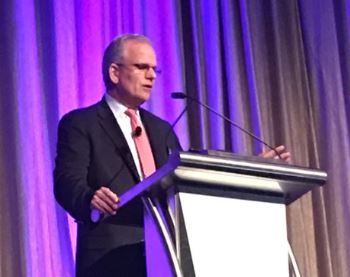 “Everyone’s interested in drone operations at night and over people. But we need to address the concerns that our national security and law enforcement partners have first. Chief among them: we – and that’s a collective ‘we,’ not just the FAA – have to be able to identify every drone in the airspace, and who’s operating it. The National Airspace System is no place for hide-and-seek.

“Until we can set remote ID requirements that will be universally applied to every drone… until we can make sure everyone is following the same rules inside the system… full integration just isn’t possible. Now, Congress knows this is an issue. And I’m hopeful we’ll see a legislative fix soon – maybe even as part of the FAA’s next reauthorization. As soon as this gets resolved, rest assured: we’re ready to move forward as quickly as possible.”

Acting Administrator Elwell was keen to stress the importance of drone operators and developers working together collectively to improve the safety case for more complex drone operations.

“Our business is safety. So when we look at an aircraft, we want to know two basic things: Is it reliable? And does it play nicely with others? That’s it. Don’t fall out of the sky, and don’t crash into other aircraft. It sounds simple. But the execution can be a lot more complex. Especially when it’s an entirely new class of users coming into a system that already includes jumbo jets, helicopters, balloons, rockets, and everything in between. The fact is, a lot of safety problems require technological solutions. And that means we need buy-in from all of you. The innovators. The inventers. The out-of-the-box thinkers.

“So here’s my advice: If you share the FAA’s goal of fully integrating drones into our airspace as soon as possible… don’t just make the business case for your products or operations. Start making the safety case, too. They go hand-in-hand. And don’t be afraid to take on the problems that are bigger than your individual companies. Go after the issues that are affecting the unmanned aircraft community as a whole – and share what you’re doing at events like this one….If a company develops a new safety enhancement, they don’t keep it to themselves. Or use it to sell more aircraft than the other guy. They share it with everybody else.

“Over twenty years ago, the FAA actually put together a team specifically designed to share safety information, and then do something with the safety information that’s being shared. It’s called CAST – the Commercial Aviation Safety Team. It’s a mix of safety professionals from industry and government – a group of about a thousand that shares data and safety ideas…In October 2016, we launched a similar effort designed just for this community – the Unmanned Aircraft Safety Team. Given the success we’ve seen with CAST, and the growing success we’re seeing with the general aviation community, I have no doubt that, in time, we’ll see more of the same with you.”