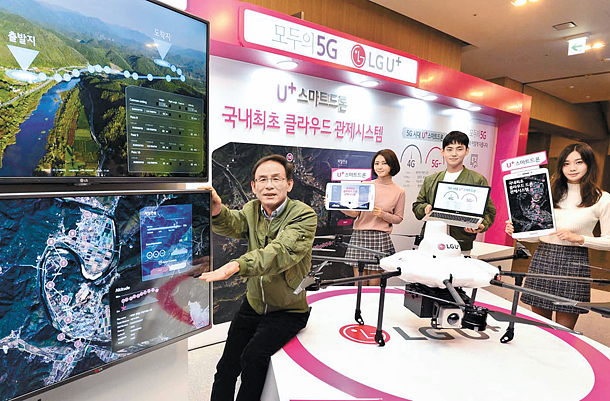 The news service reports LG U+ CEO Kwon Young-Soo has announced that the “U+ Smart Drone UTM System,” is now operational, enabling disaster monitoring and logistic transport drone operations BVLOS (beyond visual line of sight) and at night. Operators can connect to the UTM system via various portable devices such as PC / tablet/mobile and confirm the position of a drone through the UTM system in BVLOS operations.

According to reports, the LG U+ Smart Drone UTM System enables drone operators to control drones at 100 wherever the network is connected. Just by entering the destination, the entire process from a take-off of the drone to its return can be conducted autonomously. It is also possible for several people “to monitor a drone at the same time or one can make a flight plan for multiple drones, which applies to various industrial fields as an efficient drone control system,” say the reports of the system. “With U+ Smart Drone UTM System, weather information such as humidity, wind direction, wind speed can be checked at any time. Also, it shows the radio-field intensity and set the flight route to the area where the radio-field strength is high. As one of the features of U + Smart Drone UTM System, drones autonomously stop flying when it recognizes other drones, aircraft, and birds. In an emergency, drones utilize the parachute equipped to land in a safe area.”