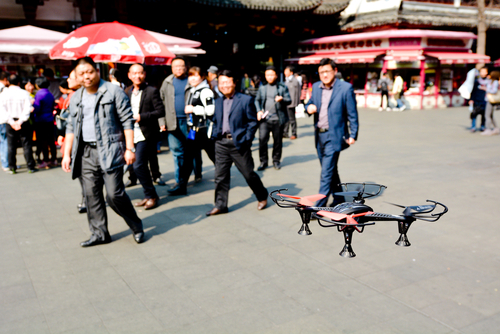 China’s ECNS news agency (http://www.ecns.cn/2018/01-22/289335.shtml) and UAS Vision (https://www.uasvision.com/2018/01/23/china-wants-more-uav-regulation/) report that the Chinese government is planning to increase its centralised, coordinating role in the country’s civil drone manufacturing and operating industries while developing new measures to prevent the flight of drones over prohibited areas.

“The ministry will promote national unified management of the industry, strengthen its competitive edge and help foster several leading drone manufacturers by 2020, according to the guidelines,” say the reports.

“While it is good to see drones increasingly used in agriculture, environmental monitoring and public entertainment, civilian drones have threatened the safety of civil aviation on many occasions….In late April, four drones flown illegally over Chengdu Shuangliu International Airport in southwest China’s Sichuan Province. They obliged 58 flights to land at alternative airports, four to return, and many more to be cancelled,” say the reports.

According to ECNS, China currently has about 20,000 unregistered unmanned aerial vehicles (UAV), said attendees at the China UAV Safety Development Forum, held at Qingdao, east China’s Shandong Province in January. There should be increased supervision of safety of drones as more products come onto the market, Luo Ge, director of the China Association of Remote Sensing Application, was reported to have told the forum.

“China Civil Aviation Administration (CAAC) has developed two cloud computing systems — U-cloud and U-care — for UAV flight registration and monitoring. Every drone equipped with a chip of over 100 grams can access the U-care system and allow the system to track its flight movements and give timely warnings to the operator about flight zones and speed limits”, Lan Yudong, developer of the U-care system, was reported as saying.

Shi Rong, business director of the Huawei Wireless X Labs, said that in the future, aviation supervisors can rely on the 5G mobile network to verify a UAV and precisely locate its movements. The network can also assist UAV applications, he said.

In late October 2017 e-commerce company Alibaba announced it had begun using drones to deliver packages off-shore, flying cargoes of fruit from Putian in east China’s Fujian Province to nearby Meizhou Island. According to the Xinhua news agency: “Flying into a strong wind, the drones took nine minutes to make the five-kilometer crossing. Each drone can carry up to seven kilograms. The drones were jointly developed by Alibaba’s delivery arm Cainiao Network, the company’s rural shopping platform Rural Taobao, and a domestic technology firm Zeng Jinmei, an online store owner based on the island, said that the drone delivery service will cut the transportation time by half and save logistic costs… Another Chinese e-commerce platform JD.com started conducting trial deliveries using drones in 2016. Smaller drones are being used in Xi’an, Shaanxi Province and Suqian, Jiangsu Province.”

Meanwhile, according to Xinhua, an array of management guidelines for drones in East China’s Zhejiang Province were discussed during a provincial meeting held around the end of November, meaning that Zhejiang is very likely to launch China’s first small UAV regional law soon. The guidelines will provide details of the areas where drones are not allowed to enter, said the news agency.