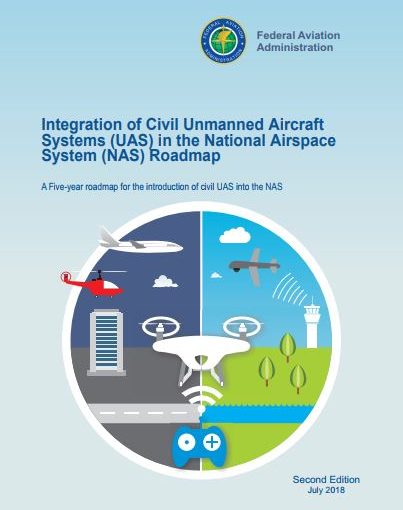 AUVSI reports: “The FAA is planning to update its rule for small UAS to permit night time operations. According to the FAA’s recently released “Integration of Civil Unmanned Aircraft Systems (UAS) into the National Airspace System (NAS) Roadmap,” the updated rule will be based on information received in waiver applications and research and observation of small UAS, including the Focus Area Pathfinder Program. An AUVSI interactive report on the Part 107 waivers shows that more than 92 percent of the 1,800 waivers have been issued for nighttime operations since Aug. 2016 when the rule went into effect. According to the roadmap, the FAA is also working on a rule to permit operations over people not directly involved in the operation of the aircraft. Recommendations from an Aviation Rulemaking Committee (ARC) held in 2016, as well as lessons learned from the Pathfinder program and the waivers, will be considered in the development of the rule.”

The roadmap outlines the key technical challenges facing the FAA and industry and in developing an integrated UTM system. Here are some of the highlights:

The C2 link between a UAS and its pilot is critical to ensure the pilot can safely control the UAS during normal and emergency situations. The C2 link typically provides telemetry information, such as altitude, airspeed, and position. This enables the pilot to maintain control of the UAS during various operational scenarios, such as complying with ATC instructions, avoiding bad weather, or avoiding nearby air traffic. Because the C2 link is critical to the safety of a UAS operation, minimum performance standards are needed to ensure the link performs safely and reliably. For large UAS, the FAA has identified an additional safety need for UAS to use protected spectrum for the C2 link. Protected spectrum includes spectrum with aeronautical mobile (route) service, and aeronautical mobile satellite (route) service allocations (desired), or other appropriate primary allocations where an acceptable level of performance, preemption, and protection can be demonstrated. In order for these large UAS to share the limited amount of protected spectrum available, a standard is necessary to coordinate spectrum sharing while ensuring safe and predictable UAS operations. Some of the challenges associated with establishing UAS C2 include the following:

Following on from the ARC committee on remote identification and tracking…

In December, the committee issued its final report and recommendations, covering issues related to existing and emerging technologies, law enforcement and security, and implementation of remote identification and tracking. Highlights of the recommendations include:

Operational capabilities associated with each step forward are defined to help prioritize R&D activities and funding. Safety remains the FAA’s first priority, and continued support for UAS research initiatives will ensure that UA are integrated into the NAS in a safe, secure, and efficient manner. The FAA’s safety-related work focuses on understanding the hazard severity from a UAS collision with other aircraft or people on the ground, as well as ways to mitigate the severity. Longer-term operations with increasing levels of automation for BVLOS flights will need to be validated and tested. Much like the driverless cars that are being tested today under specific conditions, UAS operational concepts where a pilot is not readily available to intervene will have to be carefully considered and developed so as not to increase risk to the aviation system or to people and property on the ground. 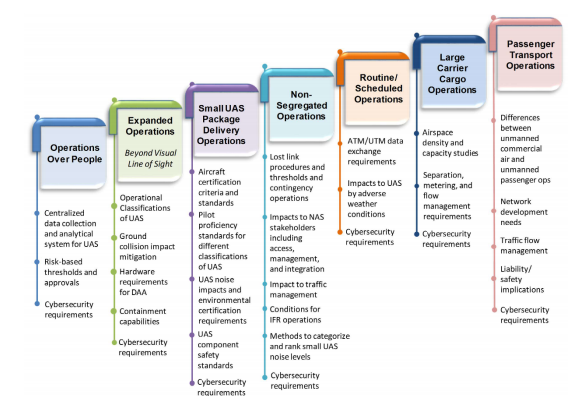