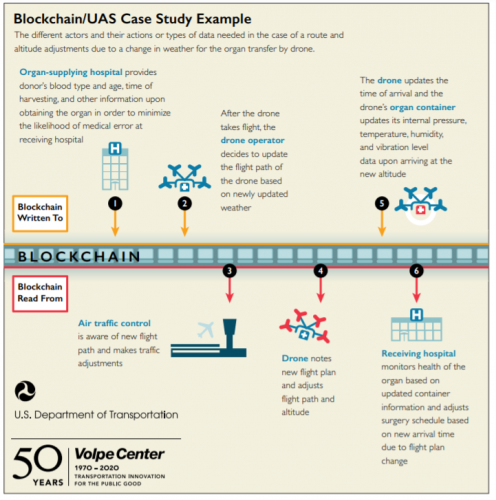 Safe and efficient air traffic management, reliable operations near high-risk areas (around crowds or airports for example), safety and security, tracking and enforcement of flight violations, or privacy and surveillance considerations, as well as vulnerabilities due to traditional meaconing, intrusion, jamming, and interference could certainly benefit from the robust, trusted information a blockchain provides, according to a recent US Department of Transportation Volpe Center report “Blockchain for Unmanned Aircraft Systems”

“Blockchain has already been used to address some UAS trust and integrity issues. Flight data recorders (also known as black boxes) can provide data that could help investigators learn what a UAS was doing prior to some event or incident. A blockchain-based flight recorder would do so in real time and could also allow law enforcement to be proactive instead of reactive. One company has proposed a blockchain-based black-box UAS system that would enable industry regulators to track and review drone flight data, insurance companies to insure drones based on reliable third-party data, and pilots to ensure compliance with regulators,” says the report.

“With NASA and the FAA leading an industry-wide standardization effort for drone traffic management, in 2018 Boeing announced that it was developing a traffic management system for all drones that uses artificial intelligence (AI) and blockchain technology. The system would efficiently track all drones flying through chosen traffic corridors. It would also blend a standardized programming interface to uphold industrial inspection, package delivery, and other important commercial applications. Google’s Project Wing tried out its own UAS air traffic control (ATC) platform with plans to leverage the company’s cloud computing infrastructure to handle the expected large volume of flight paths and adjust them in fractions of a second.

The study report that IBM obtained a patent that uses blockchain for drone fleet security, with the blockchain ledger storing data associated with UAS flights, ensuring that air traffic controllers could supervise an ever-increasing number of drones. “The chain would be a chronicle of each UAS’s path through time. When a transaction is conducted, the corresponding UAS parameters would be sent to one or more of the computing nodes in the system for validation and generate a new block. Once the new block was calculated, it would then be added to the stakeholder’s UAS blockchain. Among many other advantages, the use of a blockchain infrastructure helps in identifying non-compliant UASs as such activities are recorded in a protected ledger. The permissioned blockchain could include variable block times that change in response to environmental triggers. For instance, if a recreational drone flies too close to a restricted flight zone, it could trigger a risk flag, increasing the network’s time to provide airspace controllers with increased data on the UAS and, if applicable, its operator.”

The report highlights the use of blockchain in securing the information network to support organ transfer flights.

“About 1.5 percent of donor organ shipments did not make it to their intended destination, and nearly 4 percent had an unanticipated delay of two or more hours, according to the United Network for Organ Sharing. Adding blockchain to this process adds provenance to the organ as well as the drone. For example, adding blockchain could involve up to five different entities and as many as five separate data sets. The devices, people, or organizations (i.e., the actors) involved could include ATC, the drone operator, the drone itself (including the attached container housing the organ for transplant), the hospital supplying the organ, and the receiving hospital (i.e., demanding) the organ. Each requires varying levels of access to the blockchain ledger (i.e., some need to read to the blockchain, some need to write to the blockchain, and some need to do both). The data streams could include the UAS’s position (e.g., course, speed, altitude, etc.); the UAS’s intent (i.e., planned, subsequent route and altitudes); the UAS’s status (e.g., fuel level or state of charge, etc.); the organ itself (e.g., the donor’s blood type and age, time of harvesting, etc.); and the organ container onboard the drone (e.g., the container’s temperature, humidity, vibration level, etc.).”

(Image: US Department of Transportation)