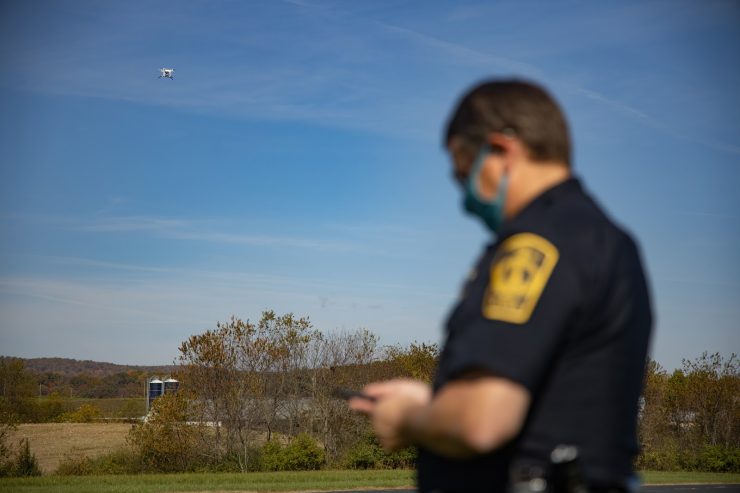 UPP2 was able to demonstrate remote identification and strategic deconfliction through alignment with standards, including the use of a common data sharing architecture for interoperability.

Five different use cases were demonstrated during the program, and all five relied on a common architecture for exchanging data with one another. This data sharing architecture is built on the discovery and synchronization service (DSS) that enables USSs to discover with whom they need to share data and ensures USS’s have a current and consistent view of shared data. Wing and ANRA each hosted DSS instances; the common architecture allows any USS to host an instance.

For example, an operator using Wing’s OpenSky application wants to plan a flight where another operator using AirMap has already planned and received approval for their flight. When OpenSky goes to validate the operator flight, the DSS will tell it – a flight already exists there and it was created by AirMap. OpenSky contacts AirMap to obtain information about its operation and uses that information to automatically deconflict with one another.

To enable broader use of Unmanned Aircraft Systems (UAS), industry-provided services must be able to safely deconflict operations and provide law enforcement and other safety agencies the ability to identify UAS when needed. To achieve these objectives, Unmanned Aircraft System Service Suppliers (USS) must be able to seamlessly share data about flights, including the details of where and when a flight will take place as well as current position and identification information for all active flights. No matter what USS a drone flyer chooses to use, all operators should have access to the data they need to fly safely.

As standards are being established and evolving to keep pace with technology and learnings, it is critical that the DSS also keep pace. For that reason, in these demonstrations the only responsibility of a government-hosted flight information management system (FIMS) was to define what each USS was authorized to do while the majority of functions required for drone operations were performed by each USS. This approach allows the Federal Aviation Administration (FAA) to focus on the oversight role and not be in the critical path for technology enhancements.

We were also able to demonstrate standards-compliant ways to enable remote identification. For example, one of the simulations was a drone delivery conducted while a temporary flight restriction (TFR) was in place for a nearby football game. A local police officer was tasked with monitoring the airspace for unauthorized drone operators using a remote ID display. The delivery drone had permission from the FAA to operate within the TFR. The USS verified the authenticity of the authorization prior to the flight, and then included the authorization in the remote ID data for the flight.

The police officer simply had to open a display application to get a view of the airspace. He could immediately identify the drone, and confirm the flight was authorized to be in the TFR. And curious bystanders could use a publicly available application to get information about the nature of the drone operation, but without violating customer privacy. This communication happened directly between the USSs. The delivery drone was using one platform, while the police officer and bystander were using software from different providers. These different USSs were able to identify one another, and share the necessary information.

There are multiple stakeholders in a UTM network; USSs need to communicate directly amongst themselves. This use case merges critical UTM concepts with the necessary remote ID, including approved waivers for flight, trusted verification for flying in TFR areas, and approved operators based on their waivers; as such the value of the network RID increases.

The variety of operations enabled by unmanned flight are as exciting as they are numerous: utilizing UASs to help during natural disasters, transport goods, conduct agricultural monitoring, or perform hazardous work remotely. The wide scale adoption of UASs will result in a safer, cleaner, and more efficient world.

Getting there will require continued innovation on many fronts, the most crucial of which will be proving out and codifying a collaborative, open system to manage the increased air traffic that will result from the proliferation of UASs in our world. UPP2 was a critical step to enable such a system that will allow UASs to expand the benefits of aviation to more people around the world.