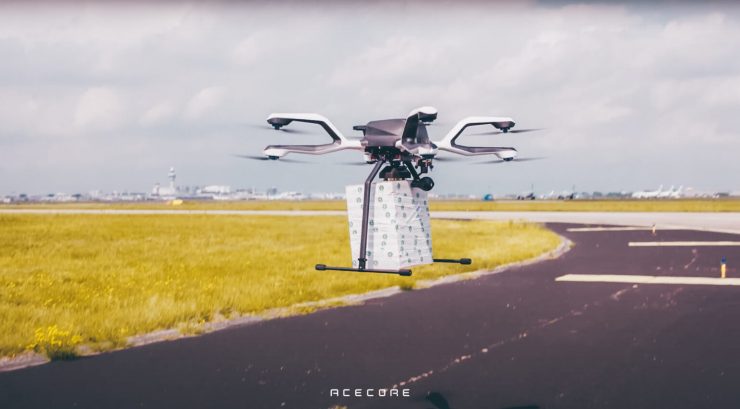 Dutch air navigation service provider LVNL seized the opportunity to test a number of innovative drone applications after traffic was greatly reduced as a result of COVID-19. Working together with Dutch Drone Delta, Schiphol spent a week testing the technical as well as the social aspect of drones flying at an active airport. Under the temporary exemption and in close contact with the ASNP, drones were allowed to fly in the CTR to test applications such as runway inspection and delivery of airplane parts across the airport.

Among those participating, Dutch drone operator Acecore demonstrated its Neo octocopter fitted with the company’s maglock cargo module to deliver aircraft parts. The remotely controlled electromagnetic link can hold two packages up to 9 kg, released on command by the operator. A gimbal stabilized 10x optical zoom camera is used for orientation at the drop site.

Acecore says the biggest advantage of using drones for these deliveries is the speed at which the part can be delivered to the airplane mechanics. Currently these packages are being transported by car, maneuvering through the airport. Obviously, drones can fly over the airport in a straight line, vastly cutting down on the delivery time of the component.

On the issue of flying drones at an active airport, Jorrit Linders (CEO/ Founder of Acecore Technologies) said the following: “While most people will think we’re insane for flying our drone at The Netherlands’ largest airport, I actually think it’s one of the safer environments to do testing. The control tower oversees everything that goes on and is able to guide the licensed drone operators to a safe mission.”