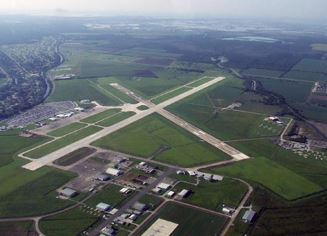 “The grant will fund taxiway, access road, ramp and utility improvements for an undeveloped 10-acre parcel at the Houma-Terrebonne Airport, which will establish a Gulf of Mexico Center of Excellence for Large-Unmanned Aircraft Systems, or L-UAS. Gov. Edwards signed an executive order at the event designating the airport as Louisiana’s L-UAS site with the Federal Aviation Administration. Future improvements will include a new 40,000-square-foot hangar that will house automated navigation systems for unmanned aircraft flying the Gulf of Mexico for oil and gas, hurricane reconnaissance, coastal protection, homeland security, research and military missions.”

“At full development, the L-UAS Center of Excellence will create 150 new jobs, retain 70 jobs and generate UD50 million in new private investment, according to EDA estimates. Louisiana Economic Development estimates the project will result in an additional 191 new indirect jobs, for a total of more than 340 jobs in the Bayou Region.

Wednesday’s event took place at the super-base hangar of helicopter transport company, ERA Group Inc., which will additionally provide nearby temporary space for the new unmanned aircraft center. Fueled by the energy sector, the Airport ranks No. 1 in the world for the total number of helicopter flights per year.

Along with other utilities and infrastructure work, the grant will fund the installation of high-performance data lines connected to LONI, the Louisiana Optical Network Initiative for supercomputing applications. Unmanned helicopters and unmanned fixed-wing aircraft will be monitored and controlled from the new 40,000-square-foot hangar, which will be equipped with highly automated, artificial intelligence systems.

The USD1.35 million EDA grant will be matched by USD337,500 in local funds, chiefly from the Houma-Terrebonne Airport Commission, and the airport is pursuing additional funding solutions with the State of Louisiana’s Department of Transportation and Development; with the FAA; and with private-sector partners. In addition to Era Helicopters, private partners include Aurora Flight Sciences LLC, 2SF LLC, COTS Technology LLC and The Advocacy Partners LLC.

Airport officials estimate the L-UAS Center of Excellence hangar could be in place within two years.