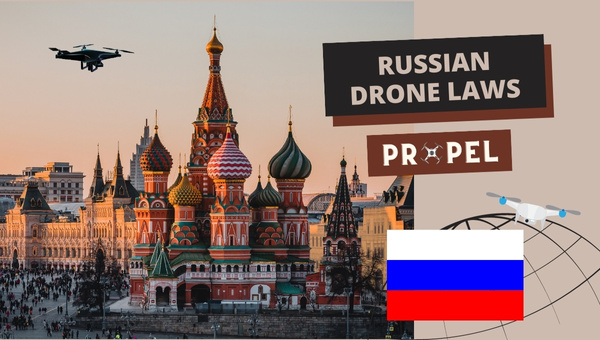 Along with many countries around the world, Russia has passed several drone laws aimed at providing a regulatory framework to support their use. An article published on the professional drones blog platform Propel RC, and reported by UAS Vision, examines the current legislation and how it applies to drone operations.

“Drones are currently legal to use in Russia,” says Propel RC. “However, it’s important to note that restrictions and regulations govern their use. For example, all drones must be registered with the Federal Air Transport Agency before they can be used in public spaces. Additionally, commercial drone pilots must pass a special licensing exam and obtain permission from local authorities before they can begin operations.

“As unmanned aerial systems, or drones, become more prevalent, so too do the questions about how they should be used. While these rules are by no means exhaustive, they should give you a good starting point for understanding what is and isn’t allowed when flying your drone. While flying a drone is legal in Russia, most Russian cities have GPS jammers installed, which emit radio frequencies that interfere with electronic devices like drones, rendering them useless.

“In June 2015, the Russian Federation’s state legislature amended the country’s air code, resulting in all unmanned aerial vehicles being reclassified as aircraft. Consequently, they are now subject to the civil aviation authority’s jurisdiction.

“If your drone weighs less than 250 grams and you stay clear of restricted or forbidden zones, you can fly without a permit or license in Russia.

“Keeping these rules and regulations in mind, you can fly your drone safely and responsibly in Russia.

“The Federal Air Transport Agency is the federal executive body in Russia that is responsible for regulating drones. There are currently no specific regulations in place for drones, but the agency is working on developing them. In the meantime, it is recommended that drone operators follow the same rules and regulations as traditional aircraft. This includes maintaining a safe distance from other aircraft, not flying over populated areas, and not flying in adverse weather conditions.

“The agency is also working on creating a drone registration system, which will help improve safety and accountability. Ultimately, the goal is to ensure that drones are operated safely and responsibly in order to protect both pilots and the general public.

“Though drones are still a relatively new technology, the Federal Air Transport Agency is working on creating regulations to ensure that they are operated safely and responsibly in Russia. It is important for drone operators to follow existing laws and guidelines to ensure their safety as well as the safety of others. As regulations become more established, pilots will have an easier time navigating what is and isn’t allowed and understanding the potential risks of flying,” concludes the article written by Richard J Gross.