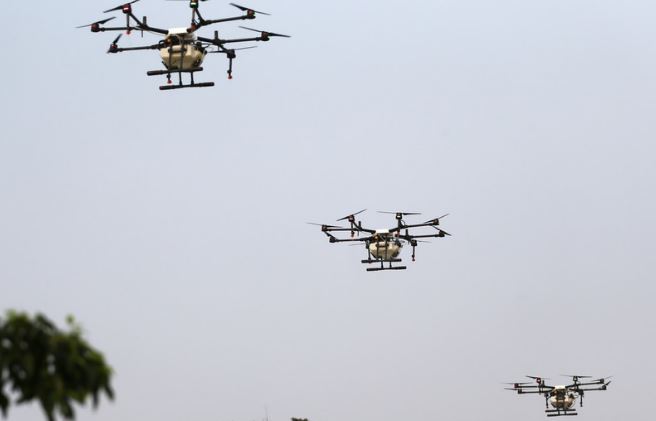 “The portable device was shown at a large-scale exercise during an international disaster response expo near Moscow on Saturday, local media reported.

According to an 8 June report from the TASS news agency (translated from Russian):

“The EMERCOM of Russia demonstrated the work of the portable UAS suppression complex at the manoeuvres at the Noginsk rescue center training ground, which prevents unauthorized use of drones in the emergency area, the TASS correspondent reports. Preventing unauthorized use of unmanned aircraft by unauthorized aircraft in their personal interests with the conduct of aerial surveys in the emergency zone and the subsequent posting of videos on the Internet is now a pressing and problematic issue. With the use of a portable UAS suppression system, EMERCOM of Russia specialists can force-land any unmanned aircraft.

“In order to prevent unauthorized flights of unmanned aircraft in the emergency area where manned aircraft is operating, specialists of the Emergencies Ministry of the plan of the exercise demonstrate the capabilities of the portable UAS suppression system, which allows for the forced landing of an unmanned aircraft,” a demonstration exercise said.

Meanwhile RT has also reported that a drone, apparently carrying explosives, has been downed on approach to Russia’s Khmeimim air base in Syria from the militant-held de-escalation zone in Idlib, becoming the fourth such incident in three days, the military said.

“Russian air defence systems deployed at Khmeimim detected and neutralized the target early Saturday, the head of the Russian Center for Reconciliation of the opposing sides in Syria said, in a daily briefing. The hostile unmanned aerial vehicle (UAV) was, as usual, shot down at a safe distance from the base and the incident caused no injuries or damage, Maj. Gen. Alexei Tsygankov emphasized. On Friday, the Russian military also shot down two “small-size air targets” that came from the north, from a territory held by illegal armed groups. Earlier on Thursday, yet another aerial target was downed on approach.

“Shooting down militant drones has become somewhat routine for the Russian forces stationed in Syria’s Latakia province; over the past month at least 25 UAVs, reconnaissance devices or armed with various types of explosives, tried to penetrate the Khmeimim airspace.