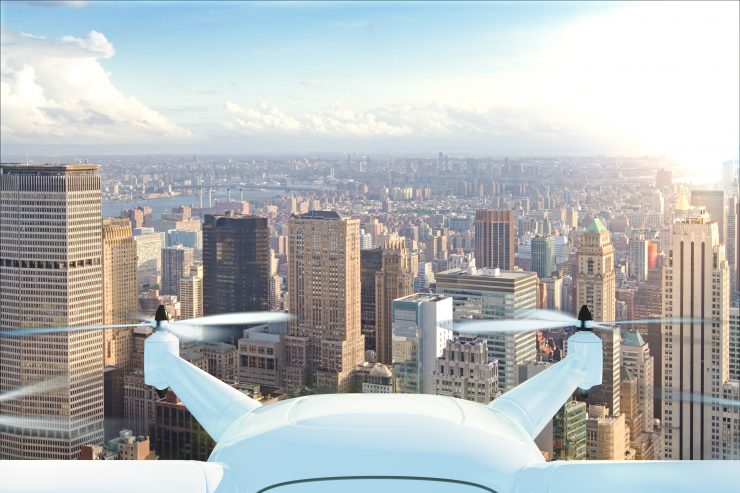 “We have made a technical opinion but it is not the final regulation as the European Commission is preparing its legislative proposal,” said EASA’s Maria Algar Ruiz. “In EASA’s Opinion the four mandatory key U-space services will have to be provided by U-space service providers (USSPs). It is still to be decided whether these four mandatory services and additional supporting services (see below) will remain in the final regulation,” she added. The first round of discussions on the Commission U-space draft legislative proposals will take place at the EASA committee on 30 June, which will trigger comments expected from States. In parallel, further comments are expected to come from the informal drones expert group set up by the European Commission. EASA will support the European Commission with the review of the comments received. 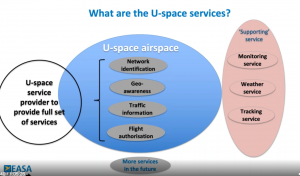 Meanwhile in the USA, the UTM draft CONOPS document V2.0 was finalised on March 2020, taking into account the understanding that the FAA’s Air Traffic Organization will not provide services to airspace users below 400ft. “We will receive next week the recommendations from the Drone Advisory Committee that has been reviewing the UTM concept,” said Jay Merkle 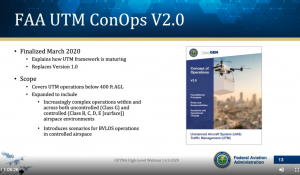 In response to a number of questions from the GUTMA membership audience, moderator Lorenzo Murzilli (Executive Board Member GUTMA, Leader, Innovation and Digitalization Unit at the Federal Office of Civil Aviation Switzerland and Swiss U-Space Programme Manager) initiated a series of discussions around priority issues for the industry.

How will USSPs be able to authorise a BVLOS flight?

EASA explained that the European Regulation foresees two types of authorisation – a general operational authorisation given by competent authorities for UAS operations under the specific category (at least UAS BVLOS operations fall under this category) and flight authorisations required by drone operators before they enter the so called U-Space airspace. “Flight authorisations will be similar to today’s flight plan authorisation system for controlled airspace in the ATM environment,” said Maria Algar Ruiz, “where operators will need to file flight plans and receive clearance before entering in the particular controlled airspace”. The flight authorisation request filled by UAS operators to enter in the U-space airspace – including drone performance and endurance – will be authorised by, or renegotiated with, the USSP. EASA is going to start working in parallel to the European Commission’s regulation adoption process to further provide acceptable means of compliance and guidance material to facilitate implementation of this service, which for instance, will include identifying the timescales between authorisation and actual flights.

The FAA has a different procedure. Authorisations from the FAA’s Low Altitude Authorization and Notification Capability (LAANC) give operators permission to enter the airspace but there is no detailed flight plan authorisation procedure required. It will be up to the drone operator to notify others where he/she intends to fly. “As we move towards strategic and tactical deconfliction we will need to have more information about the flight to support those services,” said Jay Merkle.

Coordination between UTM and ATM

The detailed coordination procedures are not included in EASA‘s Opinion but the Agency will be developing UTM/ATM coordination procedures very soon and propose them to the European Commission to support the adoption process of the regulations. For the development of the proposal, the Agency will consider as much as possible the FAA’s Low Altitude Authorization and Notification Capability  (LAANC) procedures – but they will need to be adapted to today’s ATM rules and regulations applicable in Europe, including flexible use of airspace regulation.

“Both traditional aviation and unmanned pilots have a responsibility for see-and-avoid in visual flight rules (VFR) airspace,” said Jay Merkle. “We do not envisage a tracking system at UTM altitudes but we do intend to strategically and tactically deconflict flights based on flight intent.

“The problem of non-cooperative aircraft is by far the most difficult safety risk we have encountered so far, which is why we are encouraging the general aviation (GA) community to participate in by sending messages to tell drone operators where they are intending to operate – but this not mandatory.”

“In Europe, problematic and approach are broadly the same”, said Maria Algar Ruiz, “and it is primarily the responsibility of UAS operator to adhere to the rules and they will be provided with traffic information from the USSP. There is no mandate for the GA and manned aviation  community to use U-space services in the U-space airspace but the intention is that they provide position to the USSP at a regular intervals (directly or through the ATSP)”.

Differences between the FAA and EASA – how will we harmonise the approaches?

“We aim for harmonisation”, said Maria Algar Ruiz. There are similarities and differences, with differences based on the regulatory frameworks applying to the aviation systems in the USA (one regulator, one primary service provider etc) and in Europe (with an European Aviation system with different roles for EASA, European Commission and Member States and multiple ANSPs). “Nevertheless I see the main principles as being the same but the implementation will be different. There is a huge potential for harmonisation when it comes to standards.”

“Our best strategy is to ensure we have internationally recognised standards by both authorities that we can use as a basis for harmonisation,” said Jay Merkle. In reply to a question from the moderator, Maria Algar Ruiz said “In theory, EASA could be able to participate in ASTM/UTM standards work, the main limitation being a lack of resources. So I’m not sure whether we can actively contribute but we can review and provide comments and be as active as we can.

“In Europe, we have the European UAS Standards Coordination Group (EUSCG)  which has developed the European Standardisation Rolling Development Plan that identify standards developed by the different Standards Developing Organisations (SDOs) which support the UAS manufacturers and operators in the implementations of the regulations. For EASA the most important aspect is the validation of the standards for the intended purpose (for standards aiming to support U-space implementation, there is a need to validate them in the European airspace). Whether they are developed by ASTM, EUROCAE or ISO, we don’t mind but the most important thing is its validation in the European environment. We may even need to consider standards from other fields than aviation, such as some used for automation and telecommunications work (e.g. autonomy and information technology, for example), and we need to be open to this.”