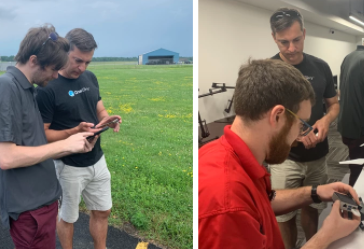 OneSky and AX Enterprize have collaborated on one of the US’ first successful cross compatibility tests of Broadcast Remote ID (RID), ensuring cross-compatibility between non-organic systems. More specifically, OneSky’s RID mobile app was tested for compatibility with AX Enterprize’s broadcast device, and vice versa. The demonstration, which was held at the NY UAS Test Site in Rome, NY, highlights both companies continued commitment to RID solutions and the adoption of global industry standards.

Remote ID (RID) technology for drones is intended to remove the anonymity of the operator, much like a car’s license plate identifies the owner. This is done with electronic systems for aircraft because license plates and tail numbers aren’t visible from the ground. RID solves the anonymity issue by attaching an electronic tag to a drone operation. This electronic tag is anonymous to the public but linked to a private FAA drone registration database where personal information is stored about the drone owner or operator.

Remote ID can be accomplished by two different recognized methods. The first method is using a networked computer system that receives telemetry from a drone’s ground control system (Network-RID, or NET-RID). The second method uses a broadcast device to transmit telemetry and the drone tag over a direct Radio Frequency (RF) link which can be received and decoded by a smartphone (Broadcast-RID). In the US, the FAA has encouraged the development of Network-RID in conjunction with the future UTM system, but is initially mandating exclusively Broadcast-RID.

While global airspace authorities have gone through many phases of testing on NET-RID concepts, there have been few tests on the published standard for Broadcast-RID. As the drone industry moves to implement RID over the next few years, however, it is critical that all systems developed to send and receive the broadcasts work together. This pioneering industry collaboration is a first step towards the successful implementation of the U.S. RID mandate.

OneSky and AX Enterprize independently developed broadcast devices, known as pucks, for testing: and mobile apps for listening for the broadcasts. The testing ensured that both companies had developed to the published standard correctly – and that each app was able to read both broadcast devices.

“We were developing towards the ASTM broadcast standard for RID and both apps seamlessly received broadcasts from both Broadcast RID senders” says Chris Kucera, OneSky’s Co-Founder and Head of Strategic Partnerships. “It worked, right out of the box.”

“The collaboration with OneSky has been an invaluable experience and is enabling the acceleration of RID development that is necessary for the safe integration of UAS in the airspace,” said Pat Baskinger, CEO of AX Enterprize.

The initial cross-compatibility testing had a positive outcome, but Kucera says that there are some critical lessons learned from the testing that may help the industry progress on the development of RID technologies.

While the standard works, “the way that people implement the standard can be different – we need to understand that everyone is implementing the standard to meet their own requirements,” says Kucera. “This testing highlights the need for collaboration. The agencies who are going to specify how the rule gets implemented need to be part of these trials to ensure that the data is broadcast the way they want to receive it.”

Solving the problems of Remote ID for all stakeholders is a complex issue. The best systems will take advantage of the best technology solutions available.

Broadcast-RID solves problems of airspace security, but because the range is only ~350 feet for BlueTooth v4, it has limited use for safety: drone operators would not be able to adjust course quickly enough to respond to an oncoming vehicle identified by Broadcast-RID before hitting it. NET-RID, however, offers a longer-range view; and the ability to project the flight path of an entire mission.
OneSky and AX Enterprize offers one of the only solutions that can display both Broadcast-RID and NET-RID fused on one app: and Kucera believes that a robust Remote ID solution encompasses both technologies. “Broadcast is one thing, network is another: but we think the two work well together,” he says.

“We want to make sure that we have products that work to support the people in the field and people in the operations center,” says Kucera. Whether through the OneSky mobile app for drone operators, or their operational airspace admin dashboard, we are continually testing to ensure that all of the available data is clear and current, contributing to both the security and the safety of the airspace.