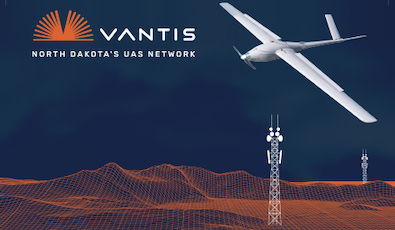 Testing and validation of Vantis, North Dakota’s statewide UAS network, is well underway with more than 125 UAS and 25 manned aircraft test flights completed on the network during the developmental testing stage. Operational testing will begin this fall, and a request for proposal (RFP) soliciting a variety of unmanned aircraft to participate and provide the highest level of operational approval and safety data is anticipated to be released within the next month.

Vantis is integrating Unmanned Aircraft Systems (UAS) into the National Airspace System (NAS), with the goal of making the process repeatable, scalable, and economically viable.

Over the past year, the Northern Plains UAS Test Site (NPUASTS), which administers Vantis, has overseen significant infrastructure design, construction, and installation at key sites in McKenzie, Williams, and Grand Forks counties, the launching pads for this first-of-its-kind technology. This infrastructure includes radars, ADS-B receivers, and command and control radios on towers. A Mission and Network Operations Center at Grand Sky will allow a UAS pilot to see from the perspective of the UAS, like a manned pilot in a cockpit. Much like a cell phone network, the towers housing these technologies will be strategically located around the state so that a UAS can move seamlessly from one coverage area to another without losing the signal from Vantis.

“Currently, UAS can only fly within sight of the operator,” said Nicholas Flom, executive director of NPUASTS. “Vantis extends that range with technology, allowing us to go beyond visual line of sight (BVLOS) to make UAS operations more efficient, more economical, and more accessible.”

Aviation giants Thales USA and L3Harris Technologies have been working with NPUASTS on flight operations, testing Vantis extensively to be certain that it is functioning as expected and that it meets the highest safety standards. These testing procedures were developed in collaboration with the Federal Aviation Administration (FAA) to ensure they are rigorous, do not interfere with existing manned aviation operations, and will prove the safety and reliability of Vantis moving forward.

Results of this testing will also determine which combination of technologies will be implemented in other locations across the state to provide the most effective and most economical solution. Current development testing, ensuring the reliability of the network, will be followed by operational testing involving UAS flights using the network to emulate use cases like pipeline/road inspections and medical/cargo deliveries.

“We’re looking forward to our next phase of operational testing on Vantis with multiple UAS,” said Jim Cieplak, program manager of Vantis. “The operator will be using Vantis to control the UAS, remain well clear of manned aircraft, and support FAA operational approval and safety case analysis.”

The upcoming RFP will be released in preparation for operational testing to solicit UAS original equipment manufacturers (OEM) and other operators, that are in, or planning to begin, the FAA UAS type certification process, to fly on Vantis to ensure these technologies function universally. The aircraft and operator will need to meet certain minimum requirements to fly on Vantis with the same level of safety and reliability.