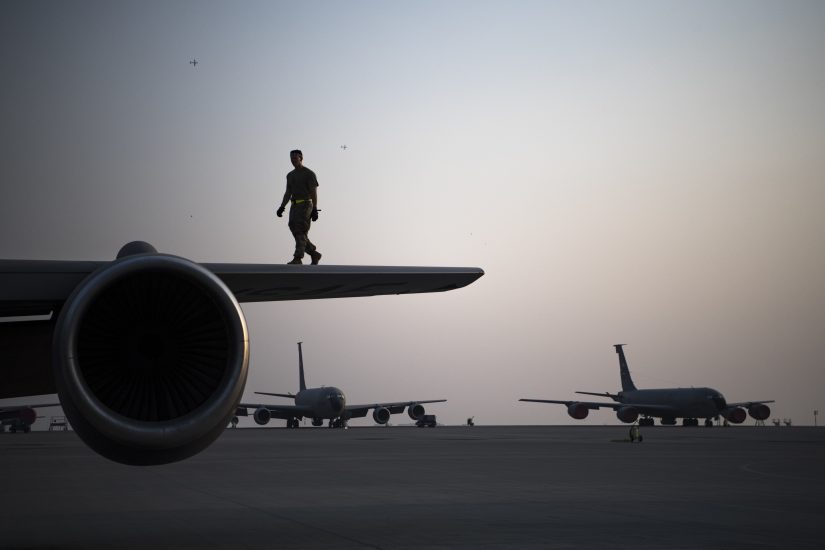 The US Air Force magazine reports the US Air Force’s key operating base in the Middle East has adopted a new counter-drone system, first deployed to the USA’s nuclear bases to protect them from the growing threat of unmanned aerial systems.

“Al-Udeid Air Base, Qatar, recently deployed the counter-small unmanned aerial systems tool to protect the sprawling base, which is home of the nerve center of Middle East air operations, mobility and refueling, and strike aircraft including B-52s,” according to the journal. “The new system lets its operators identify incoming threats and sever the connection between drone and operator, according to an Air Forces Central Command release.”

According to the US Air Force:

“The goal of the program is to build counter measures for Al Udeid AB that would pose as a last line of defense against all small UAS threats,” said Staff Sgt. Ryan Walters, 379th Expeditionary Security Forces Squadron, noncommissioned officer in charge of the C-UAS programme. To ensure proper training on the C-UAS, operators take a 40-hour course with approximately 12-15 hours of hands-on time before being allowed to independently operate the technology. “Learning a new operating system can be a challenge,” Walters stated. “The camera system alone requires hands-on operator techniques to learn how to locate and track potential weaponized threats.”

The C-UAS programme is used throughout the Air Force Global Strike Command, but Al Udeid AB was the first to implement this layer of technology in the U.S. Central Command area of responsibility, reports the magazine. Air Force Global Strike Command and U.S. Strategic Command first deployed the system to an undisclosed number of sites in 2019. The service said at the time that the systems use command and control, detection, and jamming to counter drones.

The magazine report continues: “U.S. Central Command boss USMC Gen. Kenneth F. McKenzie Jr. told lawmakers last month that drones represent the most “persistent and dangerous” threat to troops and that countering them is a top priority. “These small- and medium-sized UAS proliferating across the [area of operations] present a new and complex threat to our forces and those of our partners and allies,” McKenzie said. “For the first time since the Korean War, we are operating without complete air superiority.”