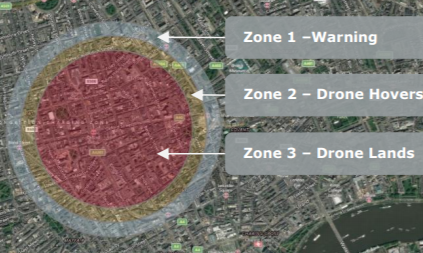 “The trials demonstrated that the network latency was sufficiently low to communicate commands to drones without allowing them to make significant headway into restricted airspace, even when the drones and the servers where the commands are initiated from are separated by large geographical distances,” said the executive summary of the report. “Initial investigations have also shown that RPS is not the best technology to accurately estimate the altitude, at least, if solely based on RSRP measurements. At this stage, the high variability of the signal strength makes it extremely difficult to estimate at altitude, but investigations will be resumed after the first trials employing 5G networks.”

“This programme of work was initially developed following discussions with the European Aviation Safety Agency (EASA) and has now been subsumed into the broader U-Space Network of Demonstrators activity with findings being shared with this group.

“Vodafone is currently compiling the scope for a final trial. Vodafone will continue working to achieve the goal of efficiently supporting connected drone initiatives in alignment with the European Commission’s U-Space vision. Future trials will continue to be conducted in a manner where any drone generated network communications do not impact the customer experience of users at ground level. Vodafone will keep working to position the mobile network infrastructure as the key enabler for BVLOS flights and prepare it for mass drone deployment. Guaranteeing reliable services at drone heights will be a priority. The deployment of 5G will further enable the realisation of drone related benefits. Vodafone intends to begin exploring the application of 5G to drones by conducting a series of trials focusing on its new capabilities. Upon the completion of the trials, findings will be made public.”