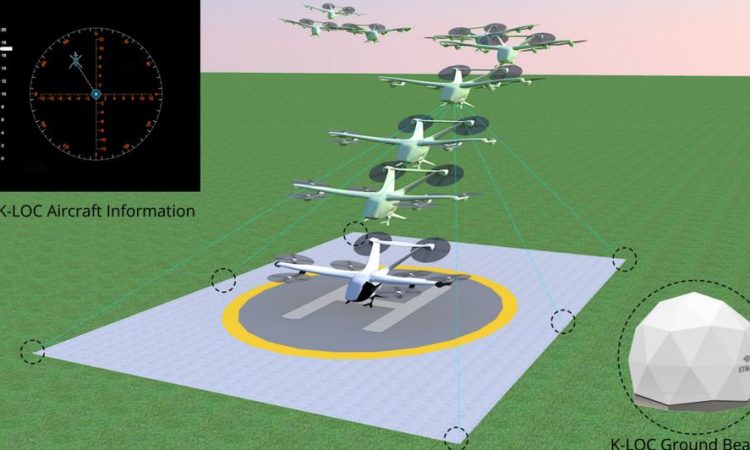 In a statement Michael Voith von Voithenberg says “AMI has been formed by leading companies, universities, and research institutions, as well as municipalities under the leadership of Airbus, with the aim to foster the development of advanced air mobility.  The initiative which is supported by the Free State of Bavaria and the Federal Republic of Germany, is setting up a series of research projects aimed at making urban air mobility within and between cities a reality.

“Kymati provides three-dimensional radar position measurement for the electronically guided vertical take-off and landing of aircraft. For drones, flight operation beyond visual line-of-sight does become a reality by implementing automatic guidance and control in every phase of the flight, especially during take-off and landing approach.

“The Kymati K-LOC system consists of two independent receivers on-board the aircraft. These units receive high-frequency radio signals from the K-LOC ground beacons, which are installed around the vertiport. During the last 500 m of the approach, K-LOC computes a highly reliable position and heading of the aircraft, relative to the landing spot. This also works in city environments where buildings reflect and shield GPS satellite signals. Even if the landing spot is in motion, e.g. a helipad on a vessel, K-LOC enables a safe landing. The K-LOC technology has a built-in redundancy and is highly resistant against any jamming or spoofing.

“Vertically landing electric aircraft (eVTOLs) for commuting within and between cities need utmost reliability when operating in the urban airspace (U-space), and a safe and highly dynamic position detection during take-off and landing is a key requirement. Kymati provides this technology already today to help enabling this future, and therefore is a valuable and welcome addition to AMI.”