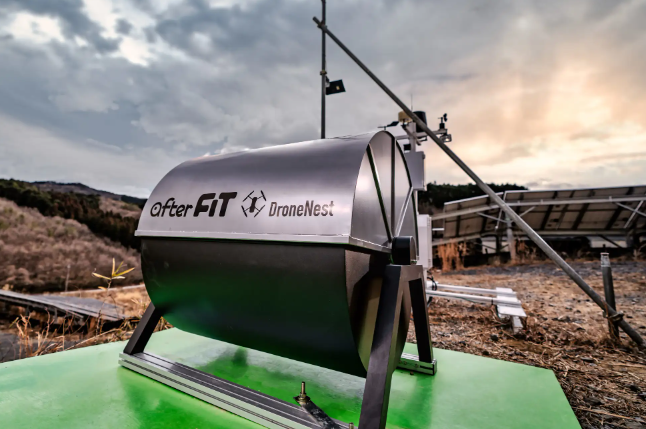 Maintenance and inspection of AfterFIT’s daytime solar power plant using unmanned aerial systems (UAS) began in February 2010, and with this approval becomes a completely unmanned operation day or night. AfterFIT says this is the first authorisation in Japan to fly a fully automatic drone BVLOS at night without an assistant.

While the government has set an ambitious goal of doubling the current amount of renewable energy power sources centred on solar power with the aim of achieving carbon neutrality in 2050, the frequent damage caused by theft of copper wires at solar power plants has been increasing in recent years, says AfterFIT. The company has long been aiming to utilize fully automated drones not only for maintenance management but also for crime prevention and monitoring of solar power plants, and this approval will advance this objective.

The Drone Nest charging port and drone installed at the solar power plant is controlled from the company’s Tokyo head office. The drone is programmed to automatically follow the predetermined inspection route and the infrared camera mounted on the aircraft takes images before automatically returning to Drone Nest. One inspection takes about 20 minutes, and charging is completed in 60 minutes.
Inspection of solar power plants by drones is becoming more common, but by performing it remotely and fully automatically, inspection efficiency can be further improved. By linking this fully automatic drone with a crime prevention / surveillance system, it will be possible to fly the drone to the location where the surveillance system detects an abnormality and warn intruders from a remote location.