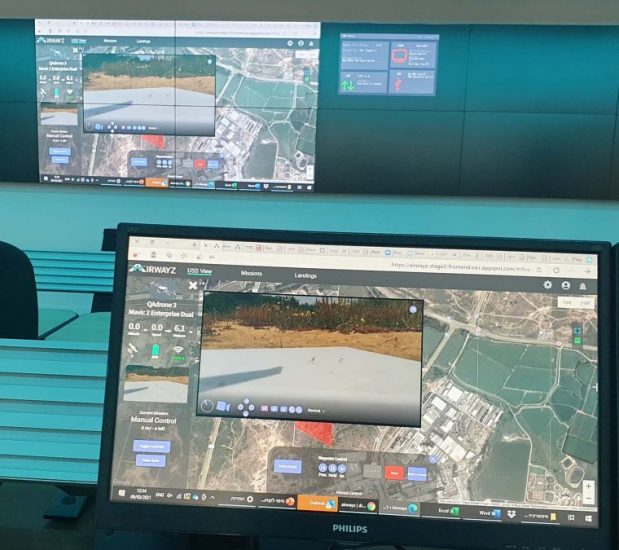 Israel’s service provider Airwayz UTM is to provide Unmanned Traffic Management (UTM) services and software to Israeli government company Ayalon Highways in order to quickly investigate and respond to missile damage to civilian structures and infrastructure in the towns of Ashdod and Ashkelon. The service enables the Israeli civil defense, fire and police services to inspect drone footage to assess damage and prioritize remedial work, saving time, making best use of resources and restoring public safety quicker, according to Airwayz news.

A special feature of the project is the use of multiple drone fleets operating in the same urban airspace and using the same services, managed by Airwayz UTM and Airwayz USS (UAS Service Supplier).

The operation, set-up by Ayalon Highways, has initially been deployed in the towns of Ashdod and Ashkelon, with the intention to expand inspections to other areas if required. Ayalon Highways issued a Request For Proposal (RFP) with a tight turnaround last week, knowing that such an operation was possible following a successful pilot scheme, dubbed The NAAMA Project, which was rolled out in Hadera in March. The NAAMA Project was organized by several government departments including the Israel Innovation Authority, the Israel Ministry of Transport (through Ayalon Highways), The Civil Aviation Authority of Israel (CAAI) and The Smart Mobility Initiative at The Israel Prime Minister’s Office, in order to validate the safe and efficient integration of drone deliveries in urban environments. Airwayz also took part in the project, providing UTM and USS for several drone operators.

“Airwayz technology has been developed to enable drone fleet management in the real-world and this is the first time we will implement it, managing multiple drone fleets outside of a test pilot program and in a real-life scenario. In fact, it’s the first time any UTM system will be used in this way,” says Eyal Zor, CEO and Co-Founder of Airwayz. “We are pleased to have been chosen to support such an important operation and to be able to facilitate the inspection requirements so quickly. The use of drones means the emergency services can have their eyes on site much quicker, assess the priorities and send personnel out knowing they’re using their resources effectively.”