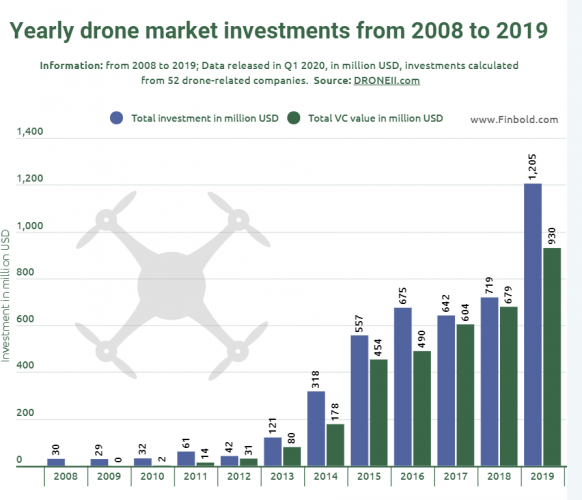 Financial news organisation Finbold.com reports that: “by the end of 2019, total investment in the (drone) industry was a record high of USD1.2 billion, a Year-Over-Year growth of 67% with venture capitalist funding standing at USD930 million.

“The data indicates that between 2008 and 2019 funding in the drone industry stood at USD4.43 billion. By 2019, venture capitalists who joined the industry from 2010 had pumped in a total of USD3.46 billion. In general, drone investment through VC represented 68.87% of all funding. In 2008, the investment in the industry stood at USD30 million before slightly dropping to USD29 million a year later. There was a notable spike in the investment between 2012 (USD42 million) and 2013 (USD121 million) with a growth of about 188.1%. From this point onwards the growth has been steady.

“Interestingly, Venture Capital funding joined the drone sector by only USD2 million in 2010, a figure that has been rising to hit $930 million in 2019. This is an indication of how the drone sector has been profitable in recent years. The interest from venture capitalists was notable between 2013 and 2014 when the investment grew by 122.5%. Generally, on a yearly basis, the VC funding in the drone industry has ranged from USD450 million to USD550 million over the past four years before the 2019 spike.